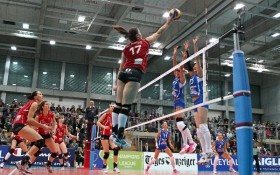 Volero fights bravely but Dinamo cruises past in four sets

Volero was a strong contender for Dinamo for three sets but eventually the mighty serving and major experience of the guests made the difference in determining the final result of the match.

Both teams started well and did not allow the opponent to score more than one or two points in a row, so the count stayed tight all the way through in the opening set.

The Russian coach had prepared his players for the strong block-defense of Volero but KAZAN struggled particularly in this first set with the jet-lag and the unknown Swiss gym.

At 20:20, Volero’s Jelena Alajbeg got stopped by the block of Ekaterina Gamova but the Russian star could not control the ball and ultimately that paved the way for the final 25-22 in favor of the home side.

They started the second set with a 2-point-lead that was slowly but steadily increased.

The Russian players attacked by using many different combinations, so Swiss head-coach Svetlana Ilic was forced to use her time-outs very early.

At the score of 13:18 new outside hitter Tijana Malesevic joined the game to give a break to Olga Sazhina who was the main target of the Russians with their serving and therefore constantly put under pressure.

This seemed to help: under the lead of strong blocks of Alajbeg and Malesevic, Volero got closer in the score.

The rallies got longer and thanks to some strong defence of libero Nina Rosic, Brankica Mihajlovic and Alajbeg could score at the net.

The home team managed to equalize, but then the Russians killed all hopes for the hosts and finished the set at 23-25.

The Swiss, however, did not surrender that easily: the young players of Volero fought bravely and managed to keep the lead until the middle of set 3 (16:12).

In this phase Dinamo did not act very convincingly except for their main scorer Gamova who brought her team back into the game with a strong serving series.

At the score of 20:20 Dinamo managed to cruise past and some chaotic moments on the host side of the net let the Russians take home the third set as well.

Swiss captain Mandy Wigger reported after the game: “We played really well in the first three sets except for the last points of set 2 and 3”.

The last set was a clear story from the beginning.

The game of Volero fell apart completely so that all Russian players could score easily.

Even changing the setter did not help the Swiss side at that point.

Under the lead of the strong serving Japanese star Megumi Kurihara who put wing spiker Malesevic under a lot of pressure, the Russians raced away and won that last set (18-25).

After the game, Svetlana Ilic was unhappy with the loss, but could not tell where she would criticize her young players.

“For us it was a difficult game due to the jet-lag and the difference of the time zone” says the captain of Dinamo KAZAN, Maria (Borodakova) Borisenko.

“That was the reason why we started so badly into the game”.

“Dinamo did a good job tonight but we were able to put them into trouble. We opened the game perfectly and the statistics tell that both teams played at the same level, except for the serving. We have to be happy and proud of our girls, especially by considering their young age. Against a team like Dinamo it is not easy to win. We tried, but failed” comments Svetlana Ilic.

Best scorers of the game were Ekaterina Gamova with 24 points and Jelena Alajbeg who chipped in 20 for Volero and finally they both were awarded as MVP in front of some 1’100 fans.

Italy: Cortellazzi – In Molfetta for the italian Cup