Budva, Montenegro, December 15, 2011. Last year Budvanska Rivijera BUDVA eventually made it to the Playoffs 12 of the CEV Volleyball Champions League but this time the second stage of the competition seems to be out of reach already after three legs as the team from Montenegro suffered tonight a 0:3 defeat (19-25, 14-25, 20-25) to France’s TOURS VB in Pool F. In order to remain in contention for a ticket to advance to the Playoffs 12, BUDVA needs to score a neat win next week in France and this won’t be easy at all for the guys around head coach Veselin Vukovic. 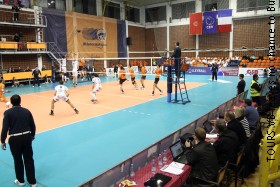 “I think they claimed this game a lot easier than I expected, and the reason for that was our bad service, so we played the first two sets virtually with no block. Basically our main problem is the one that is more or less already known. We did not play a demanding match since this past October as we played ACH Volley LJUBLJANA, some players went back to their respective national teams and hence it is extremely difficult for our group to display the necessary team work. Visually and statistically this is the worst game we have played so far in the Champions League” commented in the end head coach Veselin Vukovic.

Budvanska Rivijera was able to keep the score close only at the very beginning of the opening set before TOURS VB cruised past already by the first technical time-out (6:8) to stretch gradually the lead (12:16).

BUDVA did not find a way to resist to the attacks of David Konecny and his mates; even though the hosts clawed back up to -3 (15:18), this still could not stop the triumphal march of the guests from France.

A similar scenario unfolded also in the second set where TOURS VB was even more dominant (4:8, 8:16) having basically written the final word by the second mandatory stop.

Budvanska Rivijera was not able to get back its best play and TOURS VB eventually claimed a well deserved win in straight sets.

According to Brazilian-born head coach Mauricio Paes, the task of his side was easier than foreseen tonight: “Honestly I had expected much more resistance from Budvanska Rivijera but they actually played much worse than they had done in the previous rounds. This win means a lot to us but it surely will be more difficult next week as we play the return match in France” he says.