Istanbul, Turkey, December 15, 2011. Fenerbahce Universal ISTANBUL claimed the real highlight of the third round of action in the 2012 CEV Volleyball Champions League – Women by routing Rabita BAKU of Azerbaijan in straight sets (25-20, 29-27, 25-18) in front of 2’970 fans at “Burhan Felek” Volleyball Hall. 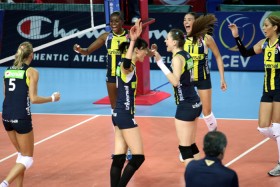 Fenerbahce downs Rabita in real highlight of the week

With this result the players in yellow and black jerseys got the provisional leadership of the standings in Pool B.

Fenerbahce dominated the game in the opening set and even though Rabita opted for many substitutions to turn the score around, still the hosts quickly pocketed the final 25-20.

Rabita went up 8:6 in the second set but the home heroines stormed back to lead 10:9; a real battle continued up to the end of the set with Fenerbahce eventually profiting of some errors made by Rabita to seal the final 29-27.

With the help of Korean star Kim Yeon-Koung (best scorer of the match in the end with 20 points) Fenerbahce caught a speedy start in set 3 (9:5) and set the pace also by the second mandatory stop with a pretty comfortable margin (16:11).

Rabita was not able to claw back and had ultimately to surrender in straight sets (25-18).

“As we play a strong opponent, we always play at our maximum. And this does not happen if we play teams that are weaker than us, at least on paper. We nevertheless still need to improve our block and defense” comments Fenerbahce coach Zé Roberto.

“This match was extremely important to determine the leadership in our group. We stayed focused from the beginning until the end and we eventually won. We played well as a team and that is the main positive we can take from this match” says captain Seda Tokatlioglu.

“This defeat results from our errors and tonight we made a way too many mistakes” states the Serbian coach of Rabita BAKU, Zoran Gajic.

“We knew they have a lot of talented players and they played much better than us tonight, so they deservedly won” adds US American star Kimberly Glass.