Istanbul, Turkey, December 18, 2011. Turkey’s Vakifbank TTelekom ISTANBUL will play host to Azerrail BAKU this coming Tuesday for the fourth round of action in the prelims of the 2012 CEV Volleyball Champions League – Women. 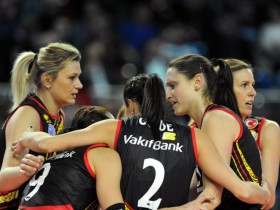 The defending champions from the past season can’t wait for this game to take place at “Burhan Felek” Volleyball Hall after they had to settle for a 0:3 defeat only a few days ago in Azerbaijan’s capital city.

“We really played a very bad game in Baku” says head coach Giovanni Guidetti. “We had many meetings after this defeat to reset the minds of our players, especially as generally speaking we are not that satisfied with the way we have been playing so far this season. Yesterday the players showed their desire to take an immediate revenge during our last training session and I am sure their dream will come true on Tuesday night” he continues.

“We are ready to play Azerrail; our team played really bad in Baku and we were not able to stick to the plan we had developed before the game. We know our team still has got the chance to finish first in the group, so we’ll fight bravely to achieve this goal. I also hope many supporters will come to the sports hall and cheer on us” adds team captain Gözde Kirdar Sonsirma.