Macerata, Italy, December 18, 2011. Italy’s Lube Banca Marche MACERATA is currently topping the standings of Pool E after three rounds of action in the prelims of the 2012 CEV Volleyball Champions League – Men. The Italians have chartered 7 points with Russia’s Lokomotiv NOVOSIBIRSK following with 6 and Fenerbahce Grundig ISTANBUL ranked third with 5. 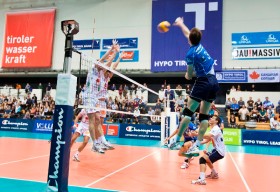 As they play host to Hypo Tirol INNSBRUCK this Tuesday, the Italians want to score another win – after edging the Austrians this past Thursday – thereby getting close to book a spot for the Playoffs 12 of Europe’s most elitist competition.

“We have to score another win, this is mandatory” says head coach Alberto Giuliani. “We shall also catch a much better start than we did in Austria where we trailed 0:1 before we got back on track to claim the match. I have asked my players to give it all to finish the prelims on top of our group for the prestige of our club as well as to get a favorable draw for the Playoffs 12. However, we first need to score two wins in the next rounds to make it out of the Pool play. I am sure we won’t have an easy task on Tuesday because Hypo Tirol is already out of contention for the Playoff phase and therefore they will be able to play without pressure” he adds.

Some 200 young Volleyball players from the neighborhood of Macerata will be attending the match at “Palasport Fontescodella” with the hosts probably missing Cristian Savani, the captain of Italy’s national team who got injured during World Cup action in Japan and who has been out for the last three matches played by Lube Banca Marche.