Constanta, Romania, January 8, 2012. This coming Tuesday, January 10, Romania’s 2004 Tomis CONSTANTA – one of the rookies included in the starting field of this year’s CEV Volleyball Champions League – will go for a mission impossible by trying to score a second win in preliminary Pool D while playing host to last year’s champions Vakifbank TTelekom ISTANBUL. 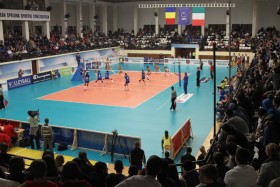 The group mentored by Serbian head coach Darko Zakoc has already written history by claiming a previous home match with Italy’s heavyweight Volley BERGAMO and a win would back up the chances of Tomis to make it to the next round of the competition, i.e. the 1/8 finals.

Anyway, regardless of the final result, this European campaign already represents a great success for Tomis that was promoted to the first division of Romania’s national league only 5 years ago. The national championship is only halfway through but the team from the Black Sea hopes to get the right to compete in Europe’s most elitist competition also in the 2012/2013 season.