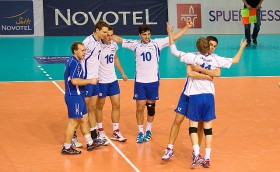 The girls could not emulate their friends as they were beaten by England 1:3 (23-25, 21-25, 25-18, 21-25). Two special guests were seen in attendance at “d’Coque” on Saturday evening, namely CEV President André Meyer, and Luxembourg Sports Minister Romain Schneider.

Right after this marathon, the German girls routed Scotland in straight sets (25-15, 25-17, 25-21) to demonstrate their good potential for future international competitions.

Luxembourg head coach Burkhard Disch changed some positions in his starting six trying to surprise Scotland and it actually turned into a good move as his players brought home the first two sets quite comfortably. However, Scotland fought back bravely while Luxembourg momentum went down in set 3, going for a double 17-25 that called for the tie-break. Luxembourg got back good tempo there while Scotland committed many easy mistakes, so that the home guys could seal the final 3-2 thereby maintaining good chances to win the title, needing now to edge Denmark in the last match of the tournament.

Luxembourg ladies displayed a solid performance on Saturday but it was not enough to claim a win over England. The guests dominated the scene in all fundamentals and especially in defense, while Luxembourg did not attack and score with the necessary consistency.

The first couple of sets unfolded with the same plot but things changed in set 3 as head coach Detlef Schönberg changed setter with Michèle Breuer joining the game. It worked as England could not adjust to the different combinations displayed by Luxembourg that alternated Alliaume and Steinbach with the pipes of Betty Hoffmann. Helped by the home audience Luxembourg cruised to the final 25-18 but could not take momentum into the next set where England showed good composure to seal the final 1:3.

CC W: Without any surprise

AUS M: Lebedew has announced that he...