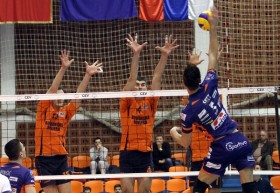 With this result all dreams to be moved to the Challenge Round of the CEV Cup were shattered and the home guys did not really live up to their statements given prior to the game as they looked out of shape and without fuel in their clash with ACH Volley.

They had actually started pretty well in the opening set (8:5, 20:18) but they eventually failed to bring it home after a close and exciting final rush.

After losing that section of the game the quality displayed by Budvanska Rivijera went rapidly down, as they trailed 6:8 and 14:19 and by that moment it was already clear that any chance to take the game was already gone.

The home guys looked like spectators in the third set playing well below their standards with ACH Volley, on the other side, dominating the scene.

“Our opponents fully deserved this victory. We did not exploit our chance in the first set where we played pretty well. We were optimistic although we knew the quality of the teams included in our Pool but this time we simply had not enough power, adding to this some more problems in reception and also with our opposite” says coach Veselin Vukovic.

“It was important to start well and make a few mistakes, after that we gradually played better. I think we served well tonight and we forced them commit many errors” adds ACH Volley mentor Igor Kolakovic.