Marek Union-Ivkoni DUPNITSA got to a win in the CEV Volleyball Champions League by edging CAI TERUEL of Spain 3:1. Todor Valchev was the best. Oscar Novillo and Nayden Naydenov gave statements. 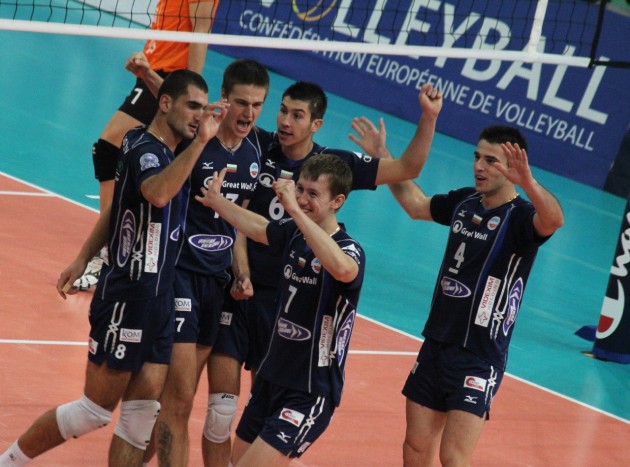 After a slow start, DUPNITSA got up 6:4 but after a time-out asked by their head coach Oscar Novillo, CAI TERUEL moved to the front (7:8). The Bulgarians gradually found more consistency, especially in blocking, and they got a margin of three points by the second technical time-out (16:13). DUPNITSA went up 24:19 but CAI TERUEL fought back with Maximo Torcello and the guests from Spain eventually pocketed the opening set at 26-28.

After this disappointment the hosts started out nervously in set 2 but a good performance by their spiker Dmitry Bahov helped claim the lead by the first technical time-out (8:5). This was maintained also later on (16:12) and even though CAI TERUEL clawed back vigorously, still Marek Union did its job and sealed that section of the game at 25-23.

DUPNITSA trailed 7:8 in set 3 but after a very close race and with Valchev on fire, Marek Union did flip the charts around (16:12). A couple of time-outs asked by Oscar Novillo could not stop the run of DUPNITSA whose players remained focused up to the final 25-20.

CAI TERUEL pressured with their service in the early phases of the fourth set but Marek Union got up 13:10; the guests fired back with Nicolas Ronchi and forced a time-out by Bulgarian mentor Nayden Naydenov, whereby DUPNITSA got back control of the operations and finished the game with a 3:1 (25-19).

“We played poorly, as we are fatigued and felt the pressure. Our reception was bad and our attacks too” said Oscar Novillo after the game.

“This is a historic result for our club and I am happy because we have fixed the problems we had in the previous matches” stressed a happy Nayden Naydenov.