Representatives of the four Zonal Associations and of the Small Countries Division provided some more inputs to the delegates in attendance of the XXXIII CEV General Assembly. CEV President André Meyer briefed the NFs. 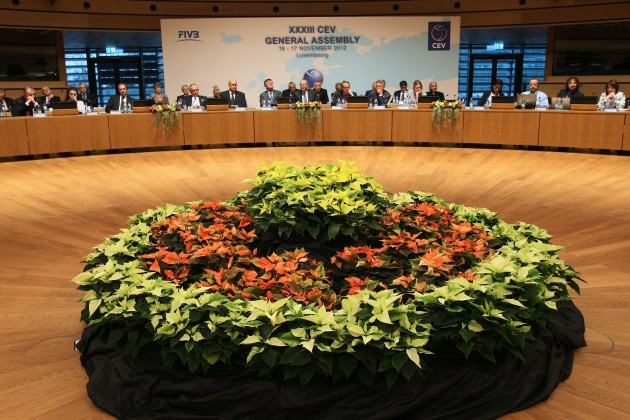 CEV President André Meyer briefed the NFs in attendance about the activities supported via the resources provided by the FIVB and namely via its Development Fund. Mr. Meyer stressed that a total of 23 projects worked out by European NFs have been accepted and are being funded by the FIVB. However, the development activities performed on the various countries are also additionally supported by the Development Department established at the CEV headquarters and via financial resources already budgeted also by the CEV for the year 2013.

Saturday’s morning session continued with reports of the four Zonal Associations established under the authority of the CEV, with CEV Vice President Jan Hronek praising the quality of the work performed by these institutions whose main focus remain the development of the sport and the implementation of activities specifically devoted to the youth and junior age groups.

BVA Secretary General Özkan Mutlugil opened this round by showcasing the work of the Balkan Volleyball Association, the oldest among all Zonal Associations operating in Europe.

Mr. Mutlugil was proud to recall that the BVA has re-styled its corporate identity by adopting a new logo, contracted a general sponsor, Halkbank, to support its activities and projects, not to forget that the very first edition of the pre-youth Balkan Championship was successfully held this past summer, thereby completing a portfolio that already includes many other Volleyball and Beach Volleyball competitions.

EEVZA Secretary General Inara Brokane stressed that the Eastern European countries have been able to stage their Beach Volleyball tour and U18 Beach Volleyball Championships, thereby involving many players and helping get more exposure for the sport across the region. Referees are traveling to neighboring countries to exchange skills and knowledge with their colleagues and the EEVZA is also profiting of the cooperation with the CEV and the other Zonal Associations. Courses for youth coaches were also staged by the EEVZA and other educational materials are being dispatched to the members via the valuable help provided by the Russian Volleyball Federation.

MEVZA President Karl Hanzl (AUT) shortly reviewed the activities of the Middle European Zonal Association whose highlight remains the Middle European League which is played by teams of six countries that are also participating in the European Cups. The plans for the future include the expansion of the MEVZA portfolio with the addition of more Beach Volleyball competitions.

NEVZA President Magnus Tausen briefed the General Assembly about the competitions held in Northern Europe with the main focus being once more the age group Championships whereby young players can enjoy a good combination of competitive sport, fun and friendship. The Club Championships are regularly held while Beach Volleyball is gradually moving forward with the assistance provided by Norway. Finland has been made responsible for educational activities with ad-hoc projects specifically addressed to school pupils; as per the decision of the last NEVZA General Assembly, England will stage the U17 Champs for the next three years at the Volleyball center in Kettering while the U19 will be concentrated in Denmark for the same period in order to make sure all nations will be able to participate, to bring costs down and efficiency up and also to improve the general organization of this sport event.

SCD President Margaret Ann Fleming reminded that the communication among the members has significantly improved thereby going beyond also the geographical distribution of the NFs all over Europe. The first ever youth development camp – funded by the FIVB – was held this past summer in Luxembourg, with three countries in attendance, one week of fantastic Volleyball and more set to join next year. Thirteen SCD members have joined this year’s competitions, an all-time record figure, with the goals for the future being Beach Volleyball as a significant area of growth and the implementation of additional development projects.

GER M: Moerser opened the weekend with a victory