Bulgaria/Italy and Netherlands/Belgium to host next European Championships

CEV President André Meyer announced that Bulgaria and Italy will host the 2015 CEV Volleyball European Championship – Men in Varna, Plovdiv and Sofia in Bulgaria plus Messina and Catania in Italy. The final stage will be held in “Armeec Arena” in Sofia, that hosted the finals of the FIVB World League this year. 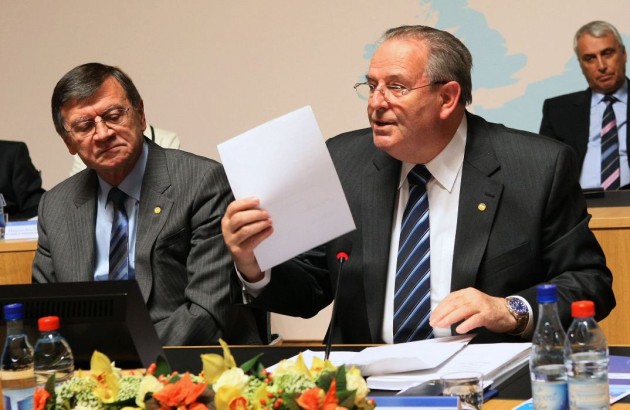 The Netherlands and Belgium – two great small countries as announced in their bid – will be the hosts of the 2015 CEV Volleyball European Championship – Women. Venues of the event will be the state of the art facilities available in Rotterdam (venue of the finals), Apeldoorn, Almere and Antwerp. With a long tradition in Volleyball and a long-lasting experience in hosting major events, not to forget the support of the local authorities, these countries promise to contribute a real Volleyball “fiesta”. With Belgium having already hosted the prelims of the Champs in 2007, the European Championship are returning back to the Netherlands after they were held there in 1995. The ultimate goal is to make Volleyball more popular and cool for the young generations with special actions starting in school and colleges already in 2014, with a Volleyball festival for all finally combined with the European Championship.

Organizers for the 2014 CEV Junior Volleyball European Championship were also announced with Finland and Estonia to host the women’s competition whose finals will be played in Tartu (EST) with Tampere (FIN) – a city with a long tradition in Volleyball from World League matches and the 2009 European Youth Olympic Festival – to host the second preliminary Pool. Tartu has got modern facilities and is a dynamic university city, whose men’s team has been a multiple national champion. On the other hand, the men’s Championship will be co-hosted by the Czech Republic and neighboring Slovakia, with the venues being Brno (CZE) and Nitra (SVK). The city of Brno, quite a familiar location for Europe’s Volleyball family where the U18 Beach Volleyball European Champs were held this past summer will be hosting the final stage of the competition.

The 2015 CEV Youth Volleyball European Championship – Girls will be held in Varna and Plovdiv, Bulgaria; Varna is seen as Bulgaria’s Volleyball “Mecca” with the local multifunctional arena to be completely renovated up to a capacity of 7,000 seats by late 2014 while the second preliminary Pool will be hosted in Plovdiv, i.e. Bulgaria’s second largest city.

The Boys Championship is set to take place in Ankara, Turkey, whose Volleyball facilities have already played host to many international events, with the main goal of the Turkish Volleyball Federation being the development of men’s Volleyball to attain results similar to what was done with the very successful women’s national teams in all age groups.