Sopot, Poland, January 16, 2012. Atom Trefl SOPOT – one of the rookies in this year’s CEV Volleyball Champions League – will play tomorrow Volero ZÜRICH for the last match on schedule in prelim Pool C. 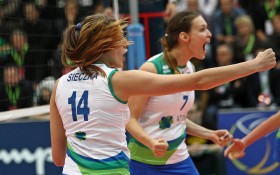 With Dinamo KAZAN having already claimed the first place in the group, the two sides will be battling for second as they are currently separated by just one point (8 for Atom, 7 for Volero).

The game will not take place at “Ergo Arena” as the venue is currently hosting some circus shows and therefore Atom Trefl had to move to a much smaller and older venue in Sopot.

Atom Trefl is also sidelined by the departure of Neriman Özsoy: the Turkish outside hitter has indeed decided to part ways the club and has moved to Russia to play there for Dinamo KRASNODAR.

The hosts still hope to go for a win, as they did some weeks ago in Switzerland where they stormed back from two sets down to eventually win the game.

Head coach Alessandro Chiappini shall opt for a starting six including many foreign players as he already did in the previous matches with the only exception being probably Ewelina Sieczka or middle blocker Maja Tokarska.