Bank BPS Fakro MUSZYNA edged on Tuesday Crvena Zvezda BEOGRAD in straight sets for a spot in the Playoffs 12. This was the firs matcj in Pool F of the Champions League, on Thursday Lokomotiv BAKU will meet Dinamo MOSCOW. Anja Bjelica, Jadranka Budrovic and Mina Popovic were the best in Zvezda, Werblinska and Dziekiewicz in MUSZYNA. 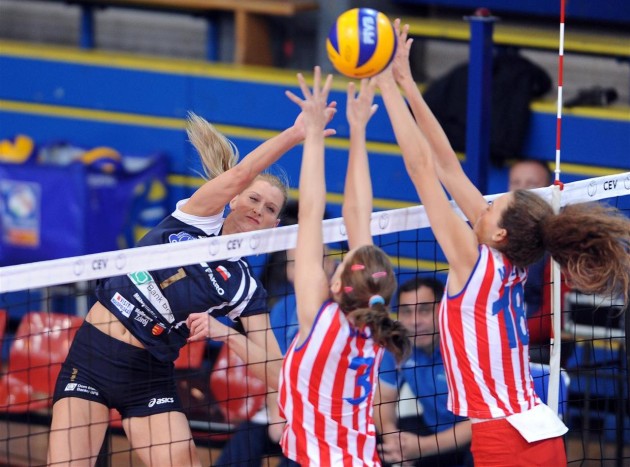 The match started with a real show of strength by the guests from Poland who went up 8:5 powered by Kinga Kasprzak and Sanja Popovic. MUSZYNA performed extremely well in attack as well as from the serving line and the set was wrapped up at 25-19 by Anna Werblinska with a block on Ana Bjelica.

MUSZYNA dominated the scene in the second set with good attacks and an excellent reception (69% of efficiency). After storming out to 8:1, Bank BPS Fakro MUSZYNA stayed in the front (14:6, 22:13) and quickly finished it off for the provisional 2:0.

Crvena Zvezda caught an excellent start in set 3 going up 2:0 and 8:3 but after that MUSZYNA got back control of the operations as they scored six consecutive points by showing many variations in offense, especially with Kasprzak and Werblinska. Head coach Bogdan Serwinski eventually had the opportunity to give some playing time also to Katarzyna Gajgal-Aniol and Dominika Sieradzan with the last point being pocketed by Eleonora Dziekiewicz (25-20).

Ana Bjelica top scored for the home side with 15 points with Jadranka Budrovic and Mina Popovic adding 7 apiece, while Werblinska and Dziekiewicz paced MUSZYNA with 13 and 11 respectively.

“We played against a very good team, MUSZYNA has got a roster composed by good and very experienced players” said Bjelica after the game. “They defend well and are strong in attack as well, so we could not find any solution to stand such quality. We were very close to take at least one set but we missed some luck”.

“We had prepared very well for this match and did not underestimate our opponent, as we know that Crvena Zvezda has got many young but promising players” adds Croatian opposite Sanja Popovic who plays this year for MUSZYNA. “We did serve well and this caused problems to our opponents tonight”.

CL M: Win is a must for Generali UNTERHACHING