CL M: Win is a must for Generali UNTERHACHING

Generali UNTERHACHING in their next to last game in prelim Pool D of the 2013 CEV Volleyball Champions League against ASSE-LENNIK. Mihai Paduretu thinks that much will be decided in the ACH Volley LJUBLJANA - Lube Banca Marche Macerata match. 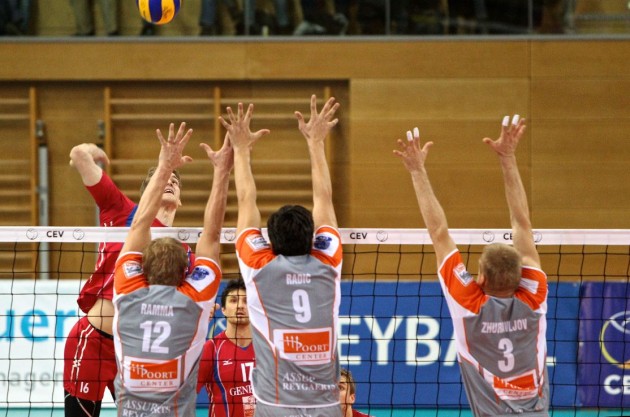 Head coach Mihai Paduretu has no intentions to talk about any “ifs” and “whens” before the last group match next week against ACH Volley LJUBLJANA, so he made his expectations for the game in Gent very clear: “If we don’t want to be eliminated after the preliminary round we must win 3:0 or 3:1 against ASSE-LENNIK” he states and adds: “Three points would be great, as that guarantees us at least the qualification for the Challenge Round of the CEV Cup”.

Whether Generali will make it to the Playoffs 12 depends on the result of LJUBLJANA’s match at MACERATA and their own efforts against the Slovenians in a week from now.

UNTERHACHING had a tough test before traveling to Belgium. Against MOERSER SC the Bavarians were two sets down and facing two match points for their opponents only to turn the game around and win it with a convincing tie-break (15-8). Generali didn’t travel back to Munich after that but stayed in Mülheim to cross the border to Belgium on Monday. With the exception of setter Huib den Boer, Paduretu can rely on all his stars on Wednesday – so this time middle-blocker Matias Raymaekers will get the opportunity to play a team from his home-country.