CEV CL M: Nothing but a win matters for Generali UNTERHACHING

It is the last match of prelim Pool D in the 2013 CEV Volleyball Champions League, but for Generali UNTERHACHING must win against ACH Volley LJUBLJANA. Mihai Padureto hopes for a win. Luka Slabe shared his thoughts. 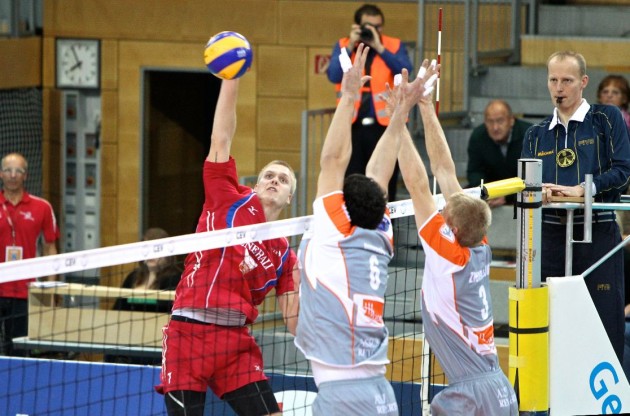 The starting position for Generali is very clear: only six out of seven second-ranked teams will head to the knockout-stage in the 2013 CEV Volleyball Champions League, so first of all head coach Mihai Paduretu’s team needs a win with three points (3:0, 3:1) to secure second place in its own group behind Lube Banca Marche MACERATA. But there is a catch to it: one of the teams that are currently sitting in second place in the other groups has to lose to open the door to the Playoffs 12 for UNTERHACHING.

“We must get our three points against LJUBLJANA. Than we will have done our job, and we will have done so in a fair way”, so Paduretu who is blaming some teams for playing not with their best line-up and their best efforts after having secured a spot in the Playoffs 12. “I hope the CEV will think about this”, Paduretu added, “but right now that is not my business: we will get our points in all honesty”.

There will be no second-guessing in Haching since ACH Volley must get one point out of the match to stay in second place behind MACERATA that surprisingly lost to the Slovenians last week. “LJUBLJANA comes with a lot of hope. Contrary to us they are still masters of their own fate regarding a trip to the Playoffs 12”, Paduretu points out.

That is echoed by ACH Volley’s head coach Luka Slabe: “Via this game we are solely responsible for our own fate in this competition”. Even with a 2:3 loss the visitors will prolong their adventure in the 2013 CEV Volleyball Champions League. Some 50 raucous fans from Slovenia are expected at Generali Sportarena to support their team that had an off-weekend and will therefore be well rested on Wednesday.

Should the evening not completely unfold to his liking, Paduretu will still take it as it comes: UNTERHACHING has secured a spot in the Challenge Round of the CEV Cup. “At this time that competition is very attractive and a good preparation for the Playoffs”, he points out. His team could meet the likes of Halkbank or Maliye Milli Piyango ANKARA, Andreoli LATINA from Italy or Lokomotiv KHARKIV from Ukraine. The draw will take place on Thursday with matches to be played already in January.

Paduretu is hopeful that he will be able to send out his best line-up against LJUBLJANA. After beating VC DRESDEN in Bundesliga play over the weekend (3:0) Generali’s head coach may count on Jan-Willem Snippe (see picture in Champions League action against Euphony ASSE-LENNIK) and Alexander Shafranovich again.

CEV CUP F: Baki-Azeryol looks for revenge to make it to Challenge Round