CEV CUP W: SES CALAIS makes it to Challenge Round after second win over BACAU 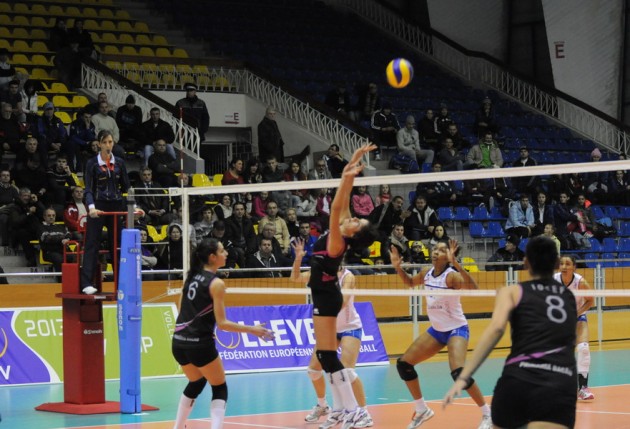 With some 350 supporters in attendance, Stiinta BACAU opened with a good pace (8:5) with good attacks killed by its outside hitters. Since Denisa Rogojinaru was struggling with an ankle injury, Stiinta had opted for a different starting six but this seemed not to affect the rhythm of the home side that enjoyed a margin of six by the second technical time-out. The attacks killed by Kremena Kamenova, the blocks by Alexandra Sobo and a good performance from the serving line by Crina Baltatu paved the way for the home side that easily clipped the final 25-16.

Things did not change much also in the early phases of the second set where Stiinta went up 8:6 even though SES CALAIS head coach Badis Oukarache had brought in middle blocker Paola Gustave. After moving up 9:7, Stiinta suffered the comeback of SES CALAIS that flipped the charts around by the second technical time-out (12:16); after a positive run for the hosts (16:17), CALAIS went to the front once more and some more turnarounds followed before the guests pocketed the final 21-25.

Powered by the attacks killed by Paula Nizetich and Maria Jose Perez, SES CALAIS caught a good start in set 3 (8:6) and helped by their setter Keylla Fabrino Ramos, they could stretch their lead via the attacks finalized by Nizetich and Michaela Dolezalova. Stiinta BACAU was not ready to surrender and fought its way back (19:20), supported by Baltatu and libero Lucia Gaido. This was definitely the most exciting and thrilling section of the game, with the score remaining very close before – after a tough fight and continuous turnarounds – CALAIS sealed the final 26-28.

The fourth set was extremely close with the teams playing point for point and Stiinta enjoying a margin of two at the first technical time-out thanks to a good serving turn by Roxana Iosef. However, as Stiinta started making mistakes, CALAIS got to the front (15:12) and by showing great determination and fighting spirit, the guests could assert their supremacy and win the game 25-23.
Best scorers of the game were Kamenova with 24 points for Stiinta BACAU and Nizetich for SES CALAIS with 24 points too.

The head coach of SES CALAIS Badis Oukarache said: “We stayed focused and we claimed a very important win in the end. We finally found our best game and are evidently happy with the result”.

Home mentor Florin Grapa said: “Today we play bad especially in attack and the spikers did not do what they were supposed to do, so the result is obvious”. Middler blocker Georgiana Fales adds: “We had carefully prepared for this game hoping to prolong our adventure in the competition, but eventually this did not happen”.