On Wednesday Ukraine’s Lokomotiv KHARKIV qualified for the Challenge Round of the 2013 CEV Volleyball Cup – Men after edging, in three straight sets (25-19, 25-17, and 25-14), their opponents of Gas Pamvohaikos VRAHATI of Greece. This and other volleyball news read on Worldofvolley.com. 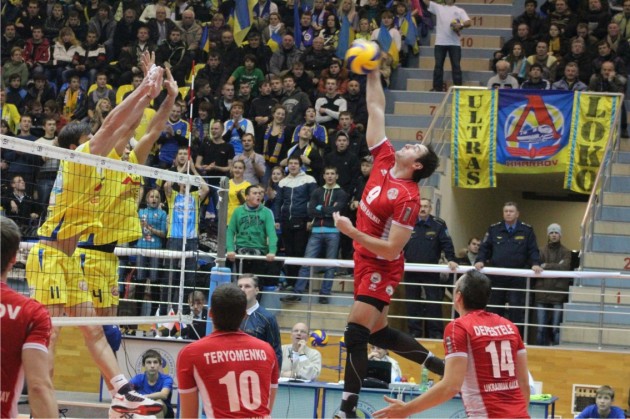 The start of the match was pretty close (8:6, 12:10) but Lokomotiv gradually got control of the operations as Nikolay Rudnitskiy and Ian Iereshchenko performed extremely well from the serving line. Lokomotiv captain Sergey Tyutlin did an excellent job in attack while two foreign players, i.e. Brazilian Leonardo Caldeira and Serbian Zoran Jovanovic, tried to keep the guests in contention for that section of the game. Still the efforts of VRAHATI were not enough to stop the march of the home guys who pocketed the opening set with the score of 25-19.

Things did not change in the second and third set where VRAHATI played as good as possible but still Lokomotiv was much stronger in almost every single fundamental. The defense and attack of the Ukrainians were simply outstanding and Lokomotiv could cruise to a speedy 3:0 win to make it to the next round of the competition. Lokomotiv was well marshaled by setter Frank Depestele and in the last section of the third set Rudnitskiy was once more one of the major forces Lokomotiv could rely on.

“This was a good game and I would like to thank our fans who came to the sports hall tonight” said the head coach of Lokomotiv Yury Filippov. “My players showed what they are capable of and we simply look forward to the next round where we’ll play a team that has participated in the prelims of the Champions League”.