Lube Banca Marche MACERATA edged the Belgian vice-champions of Euphony ASSE-LENNIK in three straight sets (25-13, 25-10, and 25-20) in Pool D of the 2013 CEV Volleyball Champions League – Men. This and other volleyball news read on Worldofvolley.com. 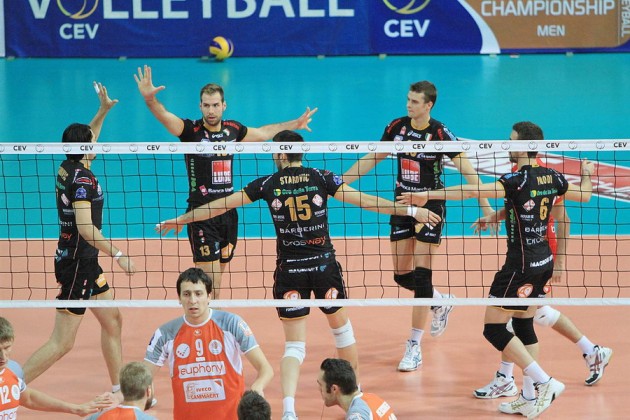 The Italians – who are joining Europe’s most elitist competition for the seventh time in their history – claimed a one-sided match by standing out with their blocks (7 in total) and aces (9). “This is a very important result” commented head coach Alberto Giuliani, “because we finally got the first position in our Pool displaying very good Volleyball in the deciding match. I am also happy with the good impression that we received from the performance of our opposite Sasa Starovic, who joined this game after some weeks of absence due to injury. And now, we hope to have a good draw for the Playoffs 12”.

The domination of MACERATA was ocular in all sets. In the first Italy‘s champions controlled the situation going for a relatively speedy 25-13 (7 points were claimed by outside hitter Simone Parodi, attacking with 100% of efficiency), and the same was in the second where Lube Banca Marche claimed a good gap right from the start (11:3), with the Belgians having evident difficulty to stand the great serving provided by Sasa Starovic (3 aces), Simone Parodi and Dick Kooy (1 ace apiece). The score of the set was in the end a massive 25-10. There was no reaction from ASSE-LENNIK also in the third set, and MACERATA finished the game quite quickly (25-20), even using some players who were initially on the bench, like setter Natale Monopoli, middle-blocker Alen Pajenk, and the spikers Ivan Zaytsev and  Luigi Randazzo. Best scorer of the match was the Dutch spiker Dick Kooy with 17 points.