On Wednesday Generali UNTERHACHING dissipated its chances to again make it to the Playoffs 12 of the CEV Volleyball Champions League. After reaching the knock-out stage in the two previous years the hosts lost to ACH Volley LJUBLJANA 1:3. This and other volleyball news read on Worldofvolley.com. 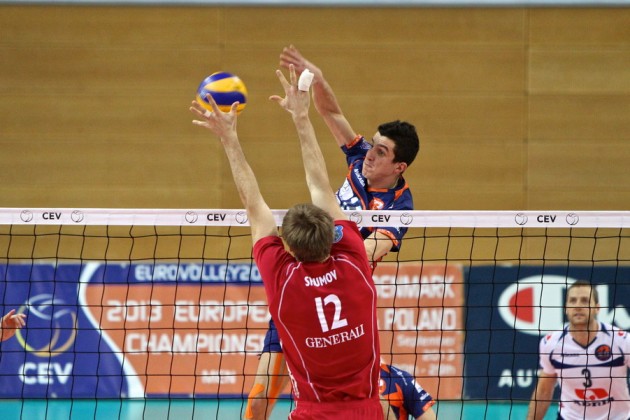 “We hit some bad luck in the first set and after that we ran out of gas. In addition we made too many mistakes that we definitely have to talk about”, UNTERHACHING’s head coach Mihai Paduretu said claiming that he was “not disappointed” by having to settle for the CEV Cup. “We are looking forward to it and hope to make it to the semis at least”. His counterpart Luke Slabe was more than pleased with his team: “We were a little bit lucky, but we executed our game plan. I’m very satisfied” he said after the game in front of 1’031 spectators at Generali Sportarena that lasted close to two hours.

Alen Sket led LJUBLJANA with 15 points, for UNTERHACHING it was of no effect that it had the best scorer of the match in Jan Willem Snippe (17), the best server in Simon Hirsch, the best blocker in Konstantin Shumov and the best receiver in Alexander Shafranovich.

All hopes of UNTERHACHING were gone already after about an hour when the team of head coach Mihai Paduretu was down by two sets to nothing. The only way for the hosts to make it to the knock-out stage would have been a convincing home victory (3:0 or 3:1) first – and a little help from other teams coming second. In the first set Generali had to play catch-up most of the time but took the lead at 20:19. The gap even widened to 22:19 but the club from the outskirts of Munich couldn’t finish off the set despite five set-points. After 35 minutes ACH Volley had won the first set, putting even more pressure on the hosts.

UNTERHACHING couldn’t really cope with that pressure, falling behind early in the second set at 5:6. And Paduretu’s team never recovered. After another 26 minutes the second set was gone and the match was virtually over for Generali: they were out of the 2013 CEV Volleyball Champions League while ACH Volley was still in.

It was only then that UNTERHACHING woke up. The hosts literally smashed the Slovenians in the third set, after going up 1:0 they never lost the lead, in fact being up by as many as ten points at 19:9.

All that was left was for LJUBLJANA to win the fourth set to guarantee an undisputed trip to the Playoffs 12. At first it didn’t look good. UNTERHACHING seemed poised to give the chances of ACH Volley a big blow, but again missed out on a set point. LJUBLJANA fought back and after 31 minutes used its first match point, sending some 50 raucous fans into heaven.