The Volleyball Hall of Fame enshrined six legendary individuals – including three Europeans – Peter Blangé of The Netherlands, Mauricio Lima of Brazil, Georgy Mondzolevskiy of Russia and Jeff Stork of the United Sates; Mike Dodd of the United States, and Lyudmila Buldakova of Russia. 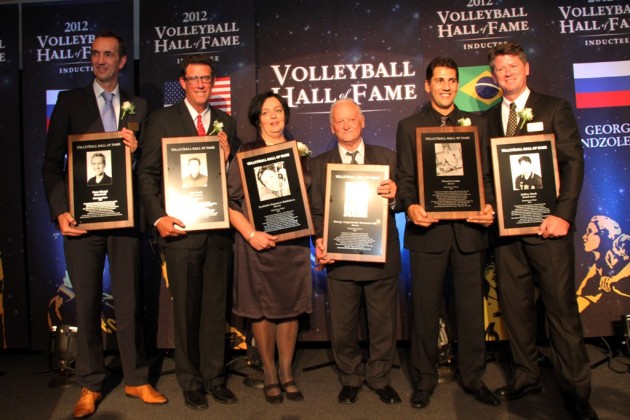 The Class of 2012 hails from four countries representing the elite players and leaders within the sport. The newest induction class consists of men’s indoor players Peter Blangé of The Netherlands, Mauricio Lima of Brazil, Georgy Mondzolevskiy of Russia and Jeff Stork of the United Sates; men’s beach player Mike Dodd of the United States; and women’s indoor player Lyudmila Buldakova of Russia, who passed away in 2006.

Blangé, recognized as the first remarkable big setter in the modern era at nearly 206 centimeters, helped The Netherlands to the 1996 Olympic Games gold medal. Buldakova, a force as both an attacker and setter, helped the Soviet Union win consecutive Olympic Games gold medals in 1968 and 1972 as its captain after earning the silver medal in the inaugural Olympics in 1964. Dodd earned the silver medal with Mike Whitmarsh at the inaugural Olympic Games for Beach Volleyball in 1996 as he compiled a career with 75 titles and 231 podium finishes on the U.S. domestic and FIVB beach tours.

“The six legends enshrined tonight represent a sampling of some of the best players to have ever stepped foot on a Volleyball court,” Volleyball Hall of Fame Executive Director George Mulry said. “The six inductees and three award winners have made a unique lasting mark on the sport and we are honored to have them memorialized here in Holyoke as part of the Volleyball Hall of Fame”.