Emmanuel "Manny" Dapidran Pacquiao, is a Filipino professional boxer and politician. He is the first and only eight-division world champion,in which he has won ten world titles, as well as the first to win the lineal championship in four different weight classes. He is also the second highest paid athlete in the world. 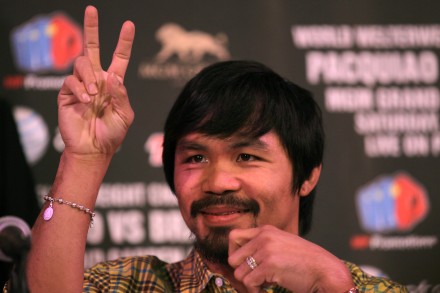 Pacquiao started his acting career as an extra in some local films and guest appearances on ABS-CBN shows. In December 2005 Pacquiao took his first lead role in Violett Films’ Lisensyadong Kamao (Licensed Fist). The movie is titled so because (according to director Tony Bernal), being a Boxer, Pacquiao is licensed to use his hands. In 2008, Pacquiao starred with Ara Mina and Valerie Concepcion in Anak ng Kumander (Son of Commander). The movie was not a commercial success and was panned by critics. Pacquiao starred in the superhero/comedy film entitled Wapakman, which was released on December 25, 2009 as an entry to the 2009 Metro Manila Film Festival. Like his previous films, Wapakman was not commercially successful. Upon the expiration of his contract with ABS-CBN, Pacquiao signed with GMA Network as an actor in September 2007. On December 17, 2007, he taped his first episode of the networks infotainment show Pinoy Records. His other projects with the network included Totoy Bato and the sitcom Show Me Da Manny in which his mother, Dionesia, also appeared. In 2012, American actor Sylvester Stallone was reportedly in talks with Pacquiao over co-starring in one of Stallone’s future films, which is in the planning stages. The project did not push through as no further updates were given after the initial report. In 2011, Pacquiao appeared on Tosh.0 in which he was paired in a fight with Daniel Tosh. It resulted in Pacquiao winning in one punch. On May 18, 2012 it was reported that Pacquiao will shoot his first Hollywood film after his June 9 fight with Tim Bradley. He will play a gangster in this movie that will also feature other fighters and martial artists such as Hector Echavarria, Lyoto Machida, Anderson Silva and Frank Mir.

On February 12, 2007, Pacquiao officially announced that he would be running for a seat in the Philippine House of Representatives in the May 2007 legislative election, aiming to represent the 1st District of South Cotabato province. He would run as the candidate of the Liberal Party faction under Manila mayor Lito Atienza that had affiliated with the government of President Gloria Macapagal-Arroyo. Pacquiao, who has himself been known to be supportive of the Arroyo government, said that he was persuaded to run by local officials of General Santos City, who hoped he would act as a bridge between their interests and the national government. But after the Philippine Supreme Court declared null and void all nominations of the Liberal Party faction under Atienza, Pacquiao ran under the Kabalikat ng Malayang Pilipino (KAMPI), a pro-Arroyo political party. Pacquiao was defeated in the election by incumbent Rep. Darlene Antonino-Custodio of the Nationalist People’s Coalition, who said, “More than anything, I think, people weren’t prepared to lose him as their boxing icon.”

On November 21, 2009, Pacquiao confirmed that he would run again for the congressional seat, but this time in Sarangani province, the hometown of his wife Jinkee. He originally planned to run for congress under his own party, the People’s Champ Movement, but has since joined the Nacionalista Party headed by Manny Villar. Villar said arrangements were made to accommodate Pacquiao’s People’s Champ Movement in a coalition with the Nacionalista Party for the May 2010 elections in Sarangani. On May 13, 2010, Pacquiao was officially proclaimed congressman of the lone district of Sarangani. He scored a landslide victory over the wealthy and politically well-entrenched Chiongbian clan that had been in power in the province for more than thirty years. Pacquiao got 120,052 votes while his opponent for the seat, Roy Chiongbian, got 60,899 votes. On June 28, 2010, Pacquiao took his oath of office as congressman before Supreme Court Associate Justice Antonio T. Carpio in the Provincial Capitol of Sarangani in Municipality of Alabel. He announced that he will transfer to President-elect Benigno “Noynoy” Aquino III’s Liberal Party from Nacionalista Party as he wants to ensure the entry of more projects to his province.

Pacquiao later moved to the Partido Demokratiko Pilipino-Lakas ng Bayan (PDP-Laban) led by Vice-President Jejomar Binay. He took his oath on April 16, 2012 in front of PDP-LABAN President and Senator Aquilino Pimentel III and Secretary-General Joey de Venecia in preparation for the upcoming 2013 elections. In congressional elections in 2013 he running unopposed for his 2nd term as congressman, thus at least a single vote, he automatically won for his position. Aside from him his wife Jinkee was also elected as Vice-Governor of Sarangani, while his younger brother, Rogelio was unsuccessfully defeated by incumbent Rep. Pedro Acharon of Team PNoy in 2nd district race in South Cotabato which includes General Santos City.

Roberto Baggio – One look at La...

Top 5 most common jobs for players...