George Weah – From striker to president

George Tawlon Manneh Oppong Ousman Weah (born 1 October 1966)is a Liberian humanitarian, politician, and an ex-footballer who played as a striker. Regarded as one of the greatest African players of all time, in 1995 he was named FIFA World Player of the Year and won the Ballon d'Or. 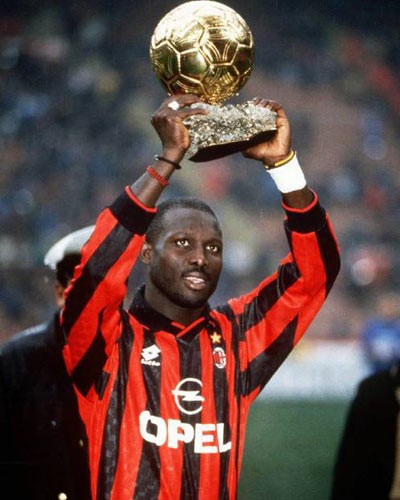 Weah is a devoted humanitarian for his war-torn country. At the 2004 ESPY Awards, he won the Arthur Ashe Courage Award for his efforts.Weah was named by Pelé as one of the top 125 greatest living footballers in March 2004. He has also been named a UNICEF Goodwill Ambassador, a role which he has suspended while he pursues a political career.

Following the end of Second Liberian Civil War, Weah announced his intention to run for President of Liberia in the 2005 elections, forming the Congress for Democratic Change to back his candidacy.

Weah obtained a plurality of votes in the first round of voting on 11 October, garnering 28.3% of the vote. This qualified him to compete in a run-off election against Sirleaf, the second placed candidate. However, he lost the run-off to Sirleaf on 8 November, garnering only 40.6% to 59.4% for Sirleaf. Weah alleged that the election had been rigged through voter intimidation and ballot tampering, and many of his supporters protested the results in the streets of Monrovia.

Weah’s lack of education became a campaign issue. He has been highly critical of those who say he is not fit to govern: “With all their education and experience, they have governed this nation for hundreds of years. They have never done anything for the nation.” He initially claimed to have a BA degree in Sports Management from Parkwood University in London.