Stanislaw Gosciniak speaks of his work in AZS Czestochowa. During that time they won four Plus League, three time were the runner-ups, on Polish Cup and one Supercup. 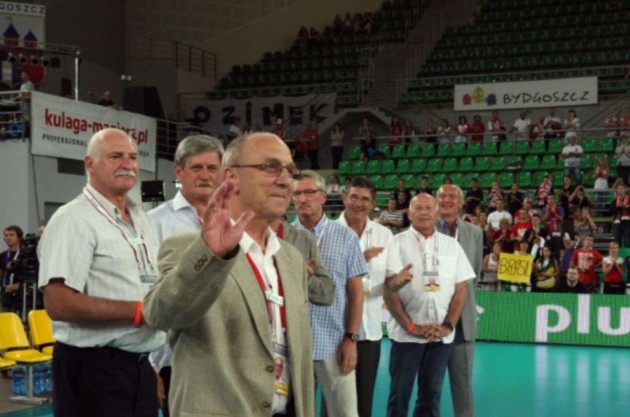 – AZS Czestochowa was one of the best teams in the country.

– I always say that I am very lucky in life. When I came to the club in Czestochowa we were in the second league. At that time, we had all the people associated with the club, activists and those interested in volleyball to give their best so it could all work. What is important is the fact that I always came across people who I worked with very well. In this way we were able to develop my program. We managed to get promoted from the second division to the first, then fallen, but after a while moved up again. I must admit that when I decided to work in Czestochowa, which maybe no one knew, I wanted to make a primarily academic club. It was intended for volleyball players not only to play volleyball, but also to finish college. I always felt satisfied that all this gave a nice effect.

– The effects of the work were visible. You won with the team four Polish championships, three times you were second place, Polish Cup, Super Cup. In addition, to this day there are players in the Plus League who were crafted under your eye.

– First, I did not work at a club that pays the players a lot of money, so financial satisfaction did not come into play. I enjoy what I do and that is reward enough for me. Reward to help the boys develop, acquire a championship along the way. For me, this was a period of satisfaction with their work.

– After so many years of working with young people does volleyball still give you satisfaction?

– Volleyball is my love, love for life. While I was playing, and now when I work with young players. I feel great satisfaction when I teach young players volleyball.

– Which won tournament tasted the best?

– The first one is great. However, after each season, when you defend the title it gives you great satisfaction. It’s really hard to defend the title previously acquired, because everyone expects  you play the best, and you couldn’t always do so.

– Since the end of the 90s much has changed. There’s no denying that money plays a lot of role.

– It was a different time. Then young players did not play for big money. They were playing just because they liked the club and loved volleyball. And because of that young people came to us willingly. It was the realization of my plan, which I prepared when I came to the club. Being in the second division we developed step by step.

– Do you remember any particular game, an event that you can mention today?

– I enjoyed every season.  Each year has been for us all a “kick” up. I had a philosophy – every year, let us progress, let us at least improve the organization, and the skills to move forward, and not stand around in one place.

– Many fans would like to see AZS Czestochowa among the top best clubs in Poland again, for the Golden Decade to return.

– Unfortunately, it happens. They are clubs which, for various reasons, no longer exist. I hope that AZS Czestochowa shows yet again that it is a great club.

Check out our After sports’ career section. Every Thursday a new story. This Thursday read about Tennis great Andre Agassi on retirement, return to play.