The leader of the Red Group in the regular Russian season, Guberniya Nizhny Novgorod has failed to pass the semi-final. In the fight for the final game the team lost from Ural Ufa. "Chempionat.com" talked with coach Plamen Konstantinov about this result, the third-place match against Zenit and plans for the coming season. 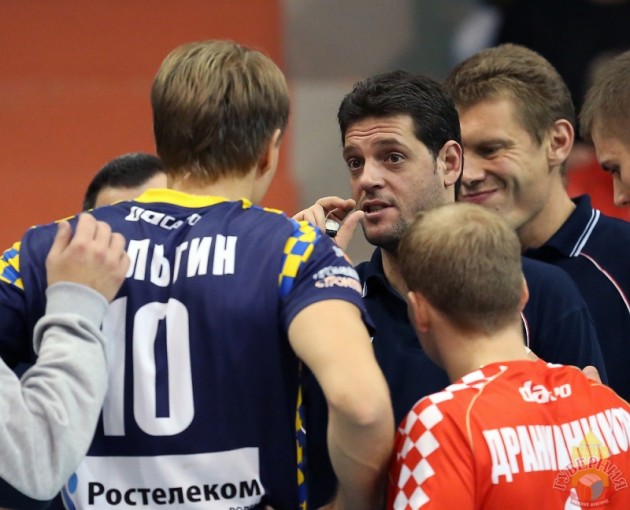 What was the deciding factor in the semi-finals?
– First of all, the experience of all the players from Ural, which in the semi-finals showed a very good level of volleyball. It was volleyball which you want to play to win in the playoffs. In fact, in the end most of the parties, in which we were or were close to victory, we have always maintained, and didn`t for one or two key mistakes. Opponent didn`t give us any chance. I think the main difference is that. In ending sets, Ufa were able to play flawlessly and not make mistakes.

Are you satisfied with the level of play that your guys showed?
– After the regular season, all began to treat us differently, the public and the fans were waiting on us to greater accomplishments. However, we must not forget that the Guberniya is a new team, we have many players who are for the first time in the playoffs. In general, I can`t say that it is too distracting. Yes, we could have done better, but it is also an experience. The guys got a priceless lesson, and it will help them in the future – said Konstantinov and added:

– I do not want to focus on our loss in the semifinals. In the end, we should be happy about the fact that they are in one of the four best teams in Russia and now are fighting for medals. I’m only sorry that Igor Shulepov got ridiculous injury right before the first game against the “Ural”. He has problems with his knee. This man has more experience and skill, and largely thanks to his efforts, we were in the semi-finals. Too bad is that he could not help us again. I think that with Igor, if he would be in good condition, it would have been a little bit different. However, it is a sport, it happens, and injuries happen. I’m just a human being sorry for Igor, because he really had a great season and helped us to show good results.

Will he play in the third place match against Zenit?
– I realy don`t known. He has a problem with the meniscus, which prevents him straighten his leg. I don`t know whether doctors will be able to help him before the match. In any case, we are extremely thankful and grateful for his contribution. With his presence on the court, our team looked impressive.

Your team finished the regular season in first place, and probably counted in the playoffs a lot. From today’s perspective, you are disappointed by the outcome? Are the semifinal a good result for the team?

– Of course, I’m sorry, and I would like more, but who do not want it!? After reviewing our semifinal game and to assess the situation, I can say one thing: “Ural” was stronger than us. Yes, we had a chance and the home field advantage, but we didn`t use it. If we hadn`t lost the second match, then our chances would be much higher. After losing the second meeting of volleyball “Ural” believed in themselves, they realized that they not give us any options, and then played at a very high level.

Konstantinov are angry for the statement of his colleague:
– I would like to mention one thing. I often read in various publications interviews Gennady Jakovljevic Shipulina about the fact that all unfair that we accidentally hit in the first place, we have got a very easy opponents in the playoffs, and he  was very hard. I think he talks too much about it, besides, it’s not true. The task of any team during the regular season – to win, then to take a high place on its results and be able to avoid the strong contenders for the next stage of the tournament. I can not find any logic in the words of Gennady Jakovljevic. I`m saying this in the open, because it interferes with my team in their interviews.

– If Belgorod wanted an easier way on the way to the final, they would have to play well over the regular season. Who prevented them to do it? He talked about the fact that we didn`t play with anyone on the way to the semi-finals, and that “Gazprom” in the quarterfinals – it’s an easy opponent, and they battered too strong contenders. I recall during the regular season, “Belogorie” lost twice Surgut. Why not win? Win, and then you will take a high place in the “regular season”.

– To me, these words didn`t like it. We really need to apologize for the fact that in the course of the season playing well and won the first place? Well, in that case, I apologize for the fact that we won in the Red Group. I`m not only apologize, but also to make sensible proposal for next year. Let’s make the two groups – the Blue and Red. At Blue we will send only one Belgorod, and Red – all other Super League teams. I think in this case, Gennady  will be pleased. Too often, he noted the results of our team in the interviews.

How to evaluate the past year for yourself? With the “Gazprom-Yugra” you have taken the final eighth place in the championship, now is not lower than fourth.

– Year turned out good, not only for me but also for the players and the club. The club and the people in Nizhny Novgorod, very ambitious, and we faced the aim to improve last year’s result. We can say that we have even exceeded the plan. We had a great season, despite the semi-final game. I can say that I am pleased with this season.

Will you be in the Guberniya for the next season?

You already know how to spend your vacation, or it is too early to think about it?
– It`s still too early. First we must show a good volleyball against Zenit. After that we will see.

It turns out that you do not have time to rest …
– No, we have time. I hope that I will be able to relax and get away from volleyball.

On the list of players who are invited to the national team for the World League 2013 there is no Alexey Ostapenko. Are you surprised?
– I think any coach has the right to make their own choices. I’m in this business don`t want to interfere. I am confident that Andrei Voronkov know the quality of all the Russian players much better than me. Giving him my advice would be wrong. It is necessary to leave the man alone to do its job. It’s his choice.

Would you like again to work with Teodor Todorov and Todor Aleksiev, maybe next season?
– We have alredy signed with the foreigners, and they will probably remain in Gazprom, so the next season is impossible.

This is why Zenit wants Marouf (VIDEO)