Puerto Rico overcame Dominican Republic after 3:2 and now it will play for the gold medal against Brazil in final of the U-18 Girls Pan American Cup. The offensive line of Puerto Rico was led by Patricia Montero with 19 points, Genesis Miranda with 16 and Julymar Otero with 11. The best scorer for Dominican Republic was Brayelin Martinez with 25 points. 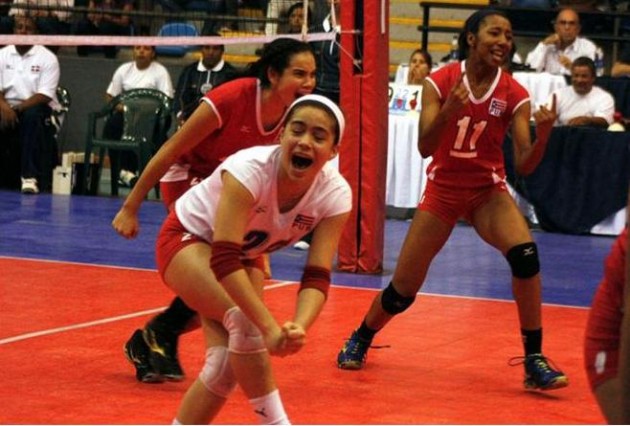 An intense match that lasted two hours and five minutes where Puerto Ricans weren’t able to seal the win because of Dominicans remarkable come:back. The winners held a margin of 19:14 in blocking and 3:1 in service points.

The offensive line of Puerto Rico was led by Patricia Montero with 19 points, Genesis Miranda with 16 and Julymar Otero with 11 points. The best scorer for Dominican Republic was Brayelin Martinez with 25 points.

Wilmarie Rivera for the winners, expressed “I feel very excited, we worked hard for this, we dominated the first two sets but our offense began failing. My team became stronger in the tournament after winning the ticket to Thailand”.

“Our lack of concentration was definitely the main cause of losing today, Puerto Rico attacked strongly and we still have the bronze medal in dispute” said Brayelin Martinez captain of Dominican Republic.

Juan Carlos Rodriguez was very satisfied with the result “Our job has been intense during the past five months; we concentrated in taking home a medal after reaching our main goal of qualifying to the World Championship”. He also explained that his girls followed the instructions perfectly, “We won with patience, trust and desire”.

“First of all congratulations to Puerto Rico, they did a splendid job” indicated Wagner Pacheco coach of Dominican Republic. “In my opinion they have the best setter of the tournament and as for my team the fact of being unbeaten until now made the girls to self:confident which is natural at this age, our blocking failed as well as our concentration” he added.