Bruno Rezende talks about his career, volleyball goals, fans and social networks in this exclusive interview 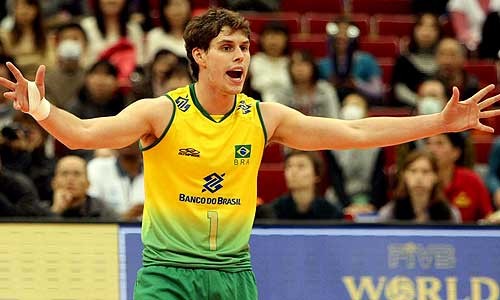 Bruno Mossa Rezende, known as ”Bruno” is setter of Brazilian National Team. Bruno was born to former volleyball players Bernardinho and Vera Mossa.  Vera Mossa played for Brazil women’s national team at the 1980 Moscow Olympics, the 1984 Los Angeles Olympics and the 1988 Seoul Olympics, while Bernandinho won the silver medal at the 1984 Summer Olympics and currently is the head-coach of Brazil National team… Bruno certainly has the volleyball running through his veins.

You won your first Brazilian Super League title in season 2005/2006. How was winning your first title at only 19 years and still be the best setter of the competition?
It was something great that I could not imagine. It was magical.

Now you are considered one of the best setters in the world. You won 5 titles in Brazilian Super league and 4 times you were the best setter of the competition. How do you keep the focus?
I seek always evolution. I know I can grow even more, I have some deficiencies and it takes nothing away from my focus.

Last year you had a short experience in Italian volleyball league and you were highly praised by the critics in Italy. Tell me something about this experience?
It was a very good experience for me. It was the first time I played for a club outside Brazil and I felt a new league. I had the pleasure making great friends and great players besides a technician that despite the short time helped me in my evolution. I hope one day I come back and if possible to Modena!

Do you want to play in the future in other leagues, as in the Italian league, Russia for example?
This will depend largely on the team and the market. Today here in Brazil we are having a hot market, with top teams and a good championship. But I believe in the right moment I go abroad.

And the Brazilian team, what is the goal for 2012?
Without a doubt it is winning the gold medal in London. I know how difficult it will be. Several countries can be champions, but it is our goal. We have the responsibility to carry the hope of all country behind us. Everyone expects this medal and we will fight hard for it.

Is it hard to be trained by your father Bernardinho?
Today it is pretty smooth. In the beginning it was difficult because he always charged me more than others and I did not understand why. But with time and with good results the situation was improving and I learn a lot from him in court. It is pleasure to be coached by one of the greatest coaches in history.

In general do you think volleyball players love social networks or they have to use them more?
I think it has grown in Brazil and several players use them. It would be more interesting if the players from other countries use them too.

If you were god and you could do anything. What would you do to improve popularity of volleyball in the world?
I would create a unique volleyball television channel, showing all the world’s strongest leagues and national team championships.