A few years ago Brankica Mihajlovic said that the jersey of Serbia is her biggest wish. A few days ago it came true. She recently visited Belgrade and received good news that the World Federation allowed her to play for the national team of Serbia. 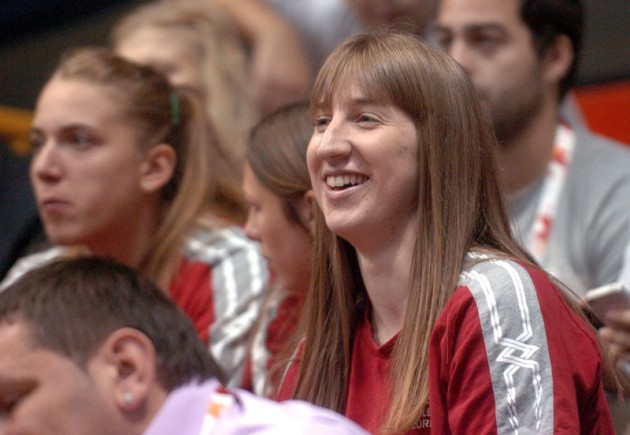 “I was very happy when I heard the news and could not believe. I expected that to happen, but not until the next year. However, people from the Volleyball Council managed to do me a favor earlier and I am grateful to them. I am very glad for becoming the member of the team that is the European champion” says Brankica still under the impression. “I cannot wait, moreover, I am a little bit scared, but in the positive sense. That is something new, beautiful and like always, I have big expectations.”

It is expected from Brankica to get used to the team and that with her qualities in attack she will contribute to the team to get good results.

“I will help as much as I can. I know that the Olympic Games are the priority and I also know that there is the place for our national team. I hope that I will as soon as possible show everything that I know playing for the Serbian team.”

Maybe that will happen in Japan, where the blue players will travel in the middle of the next week. There is possibiliy that Brankica will play the first matches at the international qualifications.

“There will be many good national teams, but I think that Serbia has quality. If we stay in good physical condition, it will not be difficult to get the visa for the Olympic Games. Once again it turned out that dreams can become reality.”

For the first time Brankca drew the attention to herself when she was playing for Volero in the first season. During the traditional New Year’s tournament in Basel, she was noticed by the well-known expert, according to many the best in the world, Bernard Rezende. At that occasion, the coach of the Brazilian men’s national team complimented her and predicted excellent future and it seems that he was right.

This year was one of the most interesting in Brankica’s life. After playing half a season in Zurich, where she also played during the last two years, Brankica moved to Korea and reached the semifinal of playoff. Recently she has signed the contract with Cannes. “Everything seemed almost incredible. If I join the team in Japan, it will be my first time in this country. If we manage to provide the placement there, London would be the crown of the year.”

Brankica will not be the “stranger” in the preparation, because she knows the “company from Zurich”, her ex-teaammaes, Tijana Malesevic, Nadja Ninkovic and Bojana Zivkovic. “There are also Ana Antonijevic and Milena Rasic from Cannes, my future teammates.”

Tijana Boskovic for WoV: “I hope that...