Juliann Faucette was the first name to come to Yamamay for the season 2012-13. Two months from the official signature, this is the first interview with the American middle blocker, excited of her new venture. 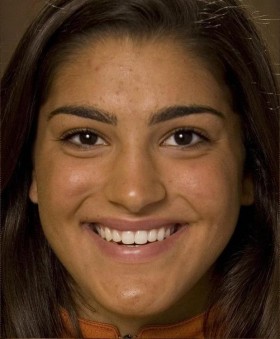 “My first year in Italy was great. I had a hard time at first with the transfer from America to Italy, but Urbino treated me very well and helped me to overcome the difficulties. I miss my family and friends back home, but I made good friends on the team. The Italian league is incredible and I learned a lot, every game was tough and the competition was very good. I loved it.“

“Now a new adventure, at the end of the season Busto Arsizio contacted me about the possibility of playing for Yamamay. I was thrilled, because I wanted to play for them, they have won every competition in which they participated, I wanted to play in that team. With Urbino, we played four times in the season against Yamamay, and each time they played great. “

“I think we will have a very strong team next season. We have some of the best players and coaches in the league. I know that the company is very organized and treats athletes very well. I think we’ll have a very good season.“

“I’m also really happy to play with my best friend Carli Lloyd. We played together for many years when we were younger and for me she’s the best setter to play with. She helps me when I’m in the field and knows how to make me play my best volleyball. She spoke very highly of Busto and the team. We always wanted to play together again.”

“At Palayamamay I remember playing the first game of the semifinals of the CEV: when our opposite was injured, I had to go and play till the end. I remember being amused and I played as best I could. I wanted to win that match to reach the final of CEV, we started the game very well and then Busto won, but I gave everything I had and I think I played a good game.“

“And then I remember the atmosphere of the arena: the fans are amazing and the arena is the best in the league. I liked playing there when I was with Urbino, now I can stay there all day.“