Uroš Kovačević for WoV: „My friend Ngapeth was simply unstoppable“

He was huge star in youth categories. All the defenses feared of him on various championships and tournaments so, it was about time that Uroš Kovačević shines in all of his glory among seniors. Firstly, he did it in previous season of Italian league, where he became vice-champion and took national Cup with Parmareggio Modena Volley as a key factor in many games. Secondly, he did it in the Final 6 of the 2015 World League in Rio de Janeiro, where his unpredictable spikes led Serbia to gold medal match. 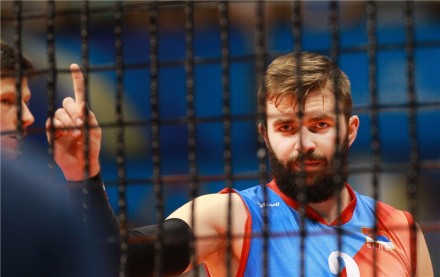 What was Serbian national team missing in the final match to beat France?

„We didn’t have the lack of energy as many would say, because it was impossible since France also played many tough matches. They came from Group 2 where they have played a lot of games. Simply, they were the only ones present on the court. My friend Ngapeth was simply unstoppable and I congratulate him. France entered the match in a better way. We missed our chances at 22-18 in the third set. They served better. In finals, if you don’t enter the match properly, you will lose it….“

You were a leader on the field in youth categories. Among seniors, you have exploded recently. What did you improve mostly on you?

„I became more mature. Working with Kolaković (ex- coach of Serbia), Lorenzetti (coach of Modena) and Grbić (current coach of Serbia) I have improved myself a lot, mostly at the physial level. Last season was crucial, although I didn’t play much in the play-offs in Italy. I can freely say that I improved my play by 30 percent.“

It was interesting to see how Brazilian fans supported Serbia in the semifinal and final. How do you comment that?

„We felt like playing at home. When Brazil was eliminated, its fans decided that, since then, we are their favorite team and it was amazing. I will use this opportunity to thank them a lot.“

Why did you leave Modena?

„I was there three years and I think it was time to change the team after all this time. Maybe the number of minutes that I have spent on the court had the influence, but I emphasize – I progressed a lot there. As far as I know, I had several offers, but I have chosen Verona because I think it would be a good environment for me.“

You are one of few famous athletes in the world that adopted beard as integral part of their look. How come?

„I hate to be shaved (laugh). I simply saw this look at some photo and decided that I want to have beard as well. I think that every player, beside being recognizable by his play, needs to be recognizable by his image,“ Uroš Kovačević showed a sense of humor beside his stunning volleyball skills.

What a blunder by organizers! Chinese anthem played during warm up (VIDEO)

Ivan Miljkovic for WoV – “The mission...