Antonin Rouzier answered the questions submitted on the Internet, by his fans. 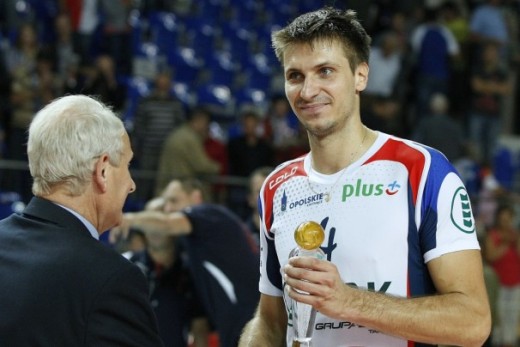 “I’m a shy, quiet guy. I don’t like to draw much attention.”

2. What is your dream aside of volleyball?

“At the end of a sport career I would like to open a personal, small business – such as a restaurant or a hotel.”

3. You’re seen on the website as “cake.” How do you feel about that?

“I think it is very nice but I do not see myself that way.”

4. What was your biggest cultural shock after arriving to Poland?

“Food and environment – especially the condition of roads.”

5. How do you like Kedzierzyn? Are you settled in this town?

“Extending the contract for another two years shows that I feel good in this city. I play for one of the best clubs in Poland. The presence of my girlfriend helps me in everyday life in Kedzierzyn-Kozle.”

6. What “action” in an indoor volleyball, with your participation, has a special place in your heart?

“Iremember my game fall from Trentino, not individual stocks.”

7. Dearest event related to the Polish fans? Can they surprise you?

8. What kind of animal would you be if you would have the opportunity to be an animal?

9. Do you ever tried to cook a French dish to teammates? Some snails or something like that?

“Yes, in the last season. My girlfriend and I, prepared a dinner for the boys from the team.”

10. The absence from the French national team is only temporary, if so, when are you going to go back to it?

“This is only a temporary withdrawal. A pause in the representation is due to a heavy-league season after season I had 3 days off, after which I had to attend the scene. I felt tired. In this decision, the lack of promotion influenced the French national team for the Olympic Games in London.”

11. Is there a place in the world that holds a special place in your memory? Apart from the family home.

“Dallas, USA – I was there on vacation. I was impressed by the enormity of the buildings and the urban fabric. Dallas is a huge and impressive city. I felt great.”

12. How do you see the Christmas performance of the song,, raining snow “with Mr. Guillaume female

“This idea was Samiki’s. At the beginning it’s just supposed to be a surprise for Pierre Pujol. The idea is to present a wider audience of late-born threw the video on Youtube, expecting little interest. Popularity cutscene surprised us positively.”

13. Where do you keep your rewards?

“All the prizes I give to Lille (girlfriend), and she pinns them at home on the board.”

14. What is your ideal birthday present?

“Winning the master of Zaks.”

15. What was the strangest place gave a singature?

ARG: Coaches Congress in Santa Fe leaves a positive balance of the lecturers

INTERVIEW: Rossini for WoV – “Match against...