Lausanne, Switzerland, January 10, 2012 – Destinee Hooker was recently voted Sportswoman of the Year for the third time by her hometown newspaper, the San Antonio Express-News, but the focus now for team USA and former high-jumper Hooker is a trip to London in the summer. 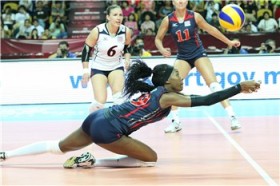 USA qualified for the Olympics by finishing second at the FIVB Volleyball Women’s World Cup in Japan in November. A storming 3-1 victory in Tokyo over eventual gold medallists Italy guaranteed USA a place at the London Games, with Hooker America’s top scorer with 24 points.

But while the 193-cm attacker was the epitome of cool on court, she was still concerned with what was at stake in Tokyo.

“I was definitely nervous,” she admitted. But she led the team against Italy and virtually carried it the day before against bronze-medallists China when she scored 37 points in a nail-biting five-setter.

After only two years with the team, was USA coach Hugh McCutcheon surprised by Hooker’s dominance at the net?
“Honestly, no,” he was quoted as saying in the San Antonio Express-News. “Once you get to know her and you understand her drive and competitive nature, it’s not surprising. Athletically, she’s a very special talent. Combine that with her drive to succeed, and it’s not surprising at all.”

Of Hooker’s performances in the critical matches against China and Italy, McCutcheon was fulsome in his praise.

“She was phenomenal,” McCutcheon said. “In those two matches … she was hot. To have performances like that, back to back, is what you have to do in that tournament. You play 11 matches in 14 days. You have to string ’em together. (Destinee) was great at that. She was consistent. She just competed like crazy and just kept fighting and scrapping. Like everyone else, she was trying to punch that ticket to London.”

Coming off knee surgery last spring, Hooker, who was once the USA’s No. 3 high-jumper, led USA to victories in the FIVB World Grand Prix in Macau, and in the NORCECA Continental Cup in Puerto Rico.

Despite the success, she is not taking an Olympic spot for granted and McCutcheon will not announce his squad until the day before the U.S. team leaves for London.

“I mean, if we know who’s going, what does it matter?” Hooker commented.
McCutcheon said it’s important to maintain that sort of attitude leading into the Olympics.
“Destinee has come a long way,” he said. “She knows what’s at stake. She doesn’t take it for granted. She comes into the gym and works hard. I think that mind-set is appropriate – that we’re not done yet.”