Poland and the hosts Italy will play for the gold medal in the Men’s Volleyball tournament of the 2019 Summer Universiade in Naples. 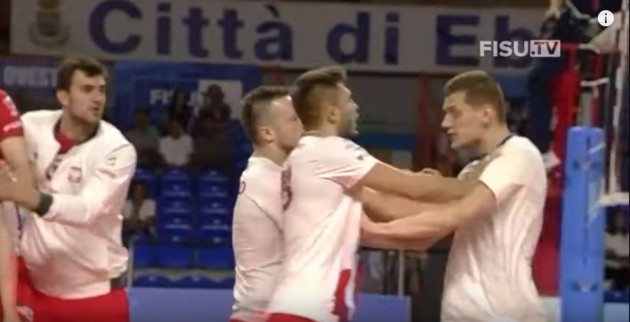 Until the semifinals, Poland did not lose a single set, defeating Brazil, France, Iran, Canada in Pool C, and Chinese Taipei in the quarterfinals so the encounter against “Zbornaya”, coached by the former legendary libero Aleksey Verbov, was the first real test for the Poles.

The players led by Paweł Woicki had to deal with Russia without Jędrzej Gruszczyński, who flew to Chicago to join the senior national team at the Final Six of the FIVB Nations League after three games in the pool stage, and also without Łukasz Kozub, who had minor health problems.

After the final whistle, there was a commotion under the net between the players of the two sides. Some Russian players even went to the Polish side of the court in order to settle scores (the incident starts at 2:19:12 in the video). Eventually, the members of coaching staffs interfered and managed to separate them.

The block of Italian players was devastating to France: 23 in only three sets, comparing to 8 of France! France had a huge chance to tie the score in sets at 1-1 but failed to keep the 4-point lead in the second set.

Giacomo Raffaelli (the new player of Poitiers, France) was Italy’s most prolific player with 17 points (8 kill blocks). Alberto Polo (Kioene Padova) set up 6 kill blocks. Kévin Rodriguez (next season in Cannes) scored 9 points for the “Les Bleus”, including 4 kill blocks. France did not serve a single ace in the match.