Less than 24 hours to go for the start of the much-awaited final weekend of the 2013 CEV Volleyball European Championship - Women. The four semi-finalists from Serbia, Russia, Belgium as well as Germany have safely arrived in Berlin, looking forward for the deciding phase of Europe’s most prestigious national team competition. Coaches and players get ready for a tough battle in Saturday’s semi-finals. 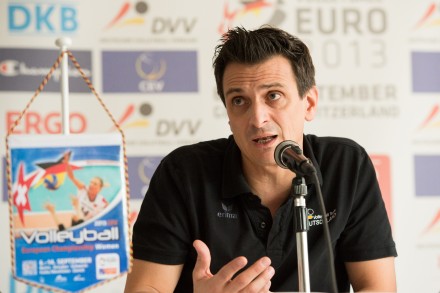 Germany head coach Giovanni Guidetti: “We finally arrived in Berlin. Day after day, match after match, we played better. The fans in Halle pushed us beyond our limits. My players shared their emotions with the home crowd. It was a fantastic feeling. It will be a difficult challenge against Belgium. Their pool win against Italy was not a fortunate coincidence. Their strength is mainly at the net with strong attacking and blocking.”

Belgium head coach Gert Vande Broek: “Germany play with an excellent organization on the court and have some very strong players. Christiane Fürst might be one of the German key players. We will try to put a lot of pressure on the German passers to slow down their offense. We had a short practice session today, but need mainly time for relaxing and recovering. I’m sure my players will be a 100% ready tomorrow.”

Belgium setter Frauke Dirickx: “The reaction after our semi-final qualification was great. There is a huge media interest in Belgium for tomorrow’s semi-final. Fans go crazy. Strong serving will be one of the main factors for our game versus Germany. The fantastic home crowd will push the German players forward. We will need to stay calm and seizing our chances.”

Serbia head coach Zoran Terzic: “My players showed strong will and determination against Italy. Russia is a different team. They are much taller and play with more risk than Italy do. However, it is a new Russian team, without stars. We will need to control mainly wing-spiker Tatiana Kosheleva and opposite Nataliya Obmochaeva.

Serbia captain Maja Ognjenovic: “Nobody expected such a clear win versus Italy. We played very well as a team. After our European Championship title two years ago in Belgrade, our fans hope for a new triumph. We do our best to fulfil our and their dreams. We will need a fast game against the tall and somehow slower Russian players. Today’s rest day gives us the chance to recover. We will be ready tomorrow.”

Quotes of the Russian team will be published after their practice.

The winner of the CEV Volleyball European Championship will qualify for the 2013 FIVB Volleyball World Grand Champions Cup featuring a total of six teams per gender with the hosts Japan being joined by the continental winners from Asia, Europe, NORCECA and South America with an additional country selected by the FIVB.

The two best-ranked teams of the 2013 CEV Volleyball European Championship – Women as well as organizer Italy will qualify for the 2014 FIVB Volleyball World Championship.