The so-called video challenge system is set to be used this weekend in conjunction with the final weekend of the 2013 Women’s EuroVolley in Germany and that innovative technology will be available also in a couple of weeks at Parken stadium in Copenhagen where the top four teams will be fighting for glory in the final stage of the VELUX EuroVolley 2013. 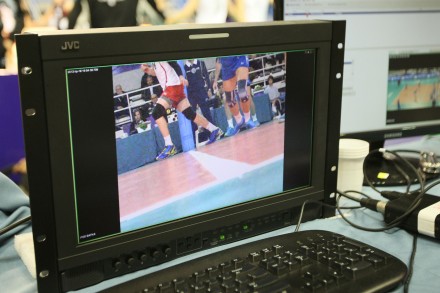 The system was already tested last year and this past March in the last stage of the CEV Volleyball Champions League but will debut at the European Championship this weekend. As long as the team ask for the support of that technology to counter-check the decisions made by the referees, the game will be briefly stopped and the second referee – together with the CEV Referee Delegate – will go through a slow-motion review of that action to confirm or overrule what the first referee has decided in first instance. The teams are allowed to ask for the challenge once per set and if the result is successful, they keep that chance for the remainder of the set. If, on the other hand, the referee was right, the team won’t have the chance to ask for another challenge. Once the rally comes to a close, the team captain will need to challenge the referee’s decision within five seconds.

“This year’s European Championship will make history for the video challenge system will be used for the very first time in our flagship competition for national teams” says CEV President André Meyer. “The system was successfully tested last year and this year as well in combination with the Champions League finals. We have seen that players and coaches like it for they know that in some key moments they can appeal to it if they feel that the referee was evidently wrong. This is also a guarantee that the final fate of an extremely important game like a European Championship final won’t be determined by a mistake. Moreover, this decision testifies our intention to make sure that Volleyball evolves with the times and that the latest technology is used in order to support the work of our highly-qualified referees thereby following in the footsteps of other sports that have gone this way as well. The system is easy to understand and the rules are clear, so I am sure that our fans will also like it” he continues.

The video challenge system will be used only in the following situations:
– Ball in or out
– Ball contact with the antennae
– Faulty net contact by player
– Contact of player’s feet with the end line when executing a service or the attack line when back a row player executes an attack hit.

Any request not complying with the above will be rejected by the first referee and the team will be sanctioned with a time delay sanction.