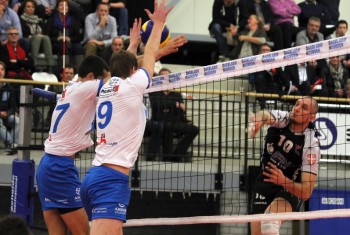 By the look of the first set it was expected that this would be just a vocation for Arkas in Lugano. Turkish team immediately achieved nice lead (8-4), and wasn’t nervous even when Lugano came to 11-12. Arkas quickly got back to plus four (18-14) and put an end on first set with routine finishing.

It all began on the same way in second set. Arkas was leading 5-1, then 8-5, but then things got complicated. Lugano first reduced to 10-11, and then totally took control of this set. It was 18-16 for home team, then 23-19, 24-20. Swiss team used first set ball after a great serve of Felipe Airton Bandero which bounced from hands of Arkas players into the out.

That gave an enormous psychological advantage to home team which reflected already at the beginning of third set. Lugano started to crush their rivals, 7-4, 8-5, 10-5, 12-7, 16-10… Arkas just managed to reduce deficit to 22-19, then 23-21, but it was too late for a come back. Swiss won an important point for 24-21, and then closed the set with a little help of Urpo Sivula who spiked the ball into the out.

But it was not an end of Arkas. Champion of Turkey recovered and started fourth set furious. It was 3-8 at first TTO, proceeded by 3-11. It was clear at that moment that this match will be decided in a tie break.

Bad news for the Turks were that Lugano saved the best moves for the end. Swiss players were unstoppable in attack, while away squad made many mistakes. After one of Kamnik, when spike went outside of court it was 10-6 for home team. Lehtonen with the block gave Lugano 12-7 lead, and Bandero finished the game with another great spike. He deserved that.

Bandero was the most efficient in Lugano with 21 points, Mariano added 19. Perrin made 24 for Arkas, Urnaut 14.