Keeping track of the FIVB’s volleyball and beach volleyball events has never been easier. Download the FIVB’s calendars for the 2014 season and keep on top of all the action that is on offer next year. 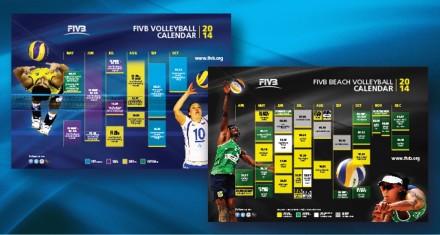 If expansion was the name of the game in 2013, the volleyball and beach volleyball community can look forward to more of the same as they head into next year.

The FIVB World League Council took the bold step of introducing an exciting and ground breaking structure for the FIVB Volleyball World League in 2014, announcing its expansion from 18 to 28 countries for the first time ever. The World Grand Prix Council then followed suit increasing the number of participants from 20 who featured in the 2013 World Grand Prix to 28.

Beach volleyball also experienced a shake-up with the Beach Volleyball Council announcing a record $10.2m in prize money, 10 Grand Slams, an inaugural FIVB Grand Slam Final and 11 Open tournaments on offer in 2014. Beach volleyball will also include the U17 World Championships in 2014 and will see the start of a new Continental Cup cycle and beach volleyball’s debut at the Youth Olympic Games.