Even though Dinamo KAZAN was certainly looking for what would have been a historic win to double up the title claimed last week in Lodz by the guys of Zenit, the players from Tatarstan could positively round out their debut in the CEV Volleyball Champions League with a memorable and precious bronze medal resulting from their almost total dominance in the classification match with Italy’s MC-Carnaghi VILLA CORTESE (3:1, 25-13, 25-17, 24-26, 25-23). As for the group captained by 2008 Olympic silver medalist Lindsey Berg, in the first couple of sets it seemed that they had totally ran out of fuel – more mentally than physically – after yesterday’s semifinal with RC CANNES where quite many chances to make it to the last and deciding stage of the competition were dissipated and even a great performance in the third set could not compensate the many ups and downs showed once again by the Italians. 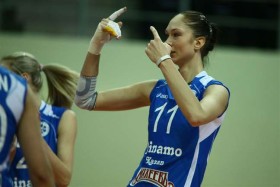 This classification match started with a minute of silence observed by all players and the audience to commemorate Vigor Bovolenta, a former European champion and Olympic medalist, who had tragically passed away on Saturday while playing a game for Italy’s B2 division after suffering a heart attack. Bovolenta was a close friend of many players included in the roster of MC-Carnaghi VILLA CORTESE and hence that moment was quite emotional for the group mentored by Marcello Abbondanza.

As this was the very first appearance in a final four for the players from the outskirts of Milan as well as for the Tatars, one of these sides was certainly going to celebrate its first European medal at the end of this match. The Italians opened with a good pace (3:1, 5:3) but Dinamo gradually found its way into the game with wing spiker Jordan Larson contributing the leadership for the first time (6:5) before Dinamo enjoyed a margin of two at the first mandatory stop (8:6). After gradually opening the gap (12:7), Ekaterina Gamova & Co. controlled the operations quite comfortably for the remainder of the set helped also by the errors committed by VILLA CORTESE whose spikers lacked efficiency and consistency. Dinamo had “overlapped” the Italians by the time the second technical time-out was called (16:8); VILLA CORTESE was being evidently sidelined in defense by the absence of its regular libero Ramona Puerari who had fallen sick this past night and was hence replaced by Luna Veronica Carocci. The supporters of Dinamo did not have to wait that long to celebrate the end of the first set as even the decision taken by Marcello Abbondanza to opt for his second lines did not change the course of the game, and KAZAN quickly wrapped it up with the massive score of 25-13 sealed by a fast attack of captain Maria Borisenko.

VILLA CORTESE found back some good play and fighting spirit in the first section of the second set going up 5:3 before Dinamo promptly leveled the count at 5 all. Once again – as in yesterday’s semifinal with Fenerbahce – the official mascot of Dinamo, a ladybird, was standing next to the reserve players from Tatarstan while some 40 Italian fans responded with their choruses from the stands of the “Heydar Aliyev” Sports and Concert Complex. The score stood at 8:7 for Dinamo as the teams enjoyed a short, compulsory break before a couple of aces by Lucia Bosetti got VILLA CORTESE back to the front (13:12). US American setter Lindsey Berg was calling quite many times for the contribution of young rising star Caterina Bosetti and the MVP of the 2011 FIVB Junior World Champs in Peru was always ready to take her responsibility by attacking with good figures and displaying some great character in spite of her still tender age. Dinamo changed gear as the final rush of the set was approaching, gradually opening a cushion (22:17) that the Italians were no more able to compensate for (25-17).

The third set followed a similar plot, as the score remained tight in the opening phases before the group around Ekaterina Gamova steadily imposed its dominance; as Marcello Abbondanza asked for a break with his girls trailing 9:14, it looked like Dinamo was comfortably going to cruise to the bronze medal which would have paired with the gold seized last week in Poland by the guys of Zenit. The capital city of Tatarstan is gradually turning into Europe’s Volleyball “Mecca” and even though the Russian fans were a little disappointed after yesterday’s defeat to Fenerbahce, still the progression of this group remains remarkable. KAZAN dethroned last year Dinamo MOSCOW in the Superleague and this coming month will be going for back-to-back titles, but the Tatars had not reckoned with a spectacular comeback of VILLA CORTESE. Dinamo fought back from 18:20, the Italians had a first set ball at 24:23 which was diverted by Gamova, but a second opportunity claimed on a spike by Bosetti touched by the Russian block was sealed by Makare Wilson (26-24).

VILLA CORTESE could not stretch that great momentum to the opening of set 4 (0:3) but the addition of second setter Giulia Pincerato helped claw back vigorously for the 3 all. A terrific battle unfolded out there on the court but the balance was steadily switching to the Italian side of the net (10:7). The block was especially working well for the team from a tiny village nestled in the suburbs of Milan but Canadian opposite Sarah Pavan was also stepping up after a pretty slow start of the game (14:9). Dinamo clipped a positive break (6:1) to storm back and level at 15 while Jordan Larson turned the charts around (18:17) forcing Abbondanza to seek refuge in a time-out. While the Italians suffered another drop of concentration, Dinamo kept cool to pocket three match balls but only the third attempt could be finalized as Caterina Bosetti spiked long to fire up the party of the Russian fans.

ITA M: Bovolenta in blue; One of the many things he loved