Finland’s head coach Tuomas Sammelvuo will be announcing next week the roster of the men’s national team in a rather unconventional way, i.e. via his Twitter account. The players called up for the current season where Finland is set to participate in the FIVB World League and then return to the World Championship after 32 years will be announced during five days. 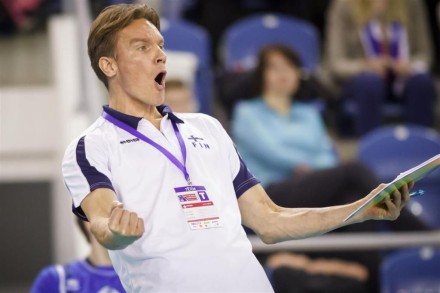 Sammelvuo – a former international star who travelled the world and played in many different countries before embarking on a coaching career – will announce the first names on Monday via his Twitter account.

The composition of the team – Sammelvuo will nominate 28 players – will be announced day after day starting with the setters, to follow then with the liberos, middle-blockers, and wing-spikers to finish it off with the opposite players. Sammelvuo will also add some comments on the nominees. English feeds will be provided as well via the Twitter account.

Social and digital media have become a very important communication tool for the Finnish Volleyball Association and the men’s national team in order to attract more fans and create additional buzz around volleyball and the performances of the “Suomis”.

Once the players are announced on Twitter, extra information will be added also on Facebook and on the official website of the Finnish Volleyball Association. An “ordinary” press release will be sent out to the Finnish media as well.

PAC U23 W: Colombia in semifinals