The coach of the Serbia Women’s National Team, Zoran Terzic will be the new coach of the Russian Omichka OMSK, that is currently led by Vladimir Kuzyutkin. 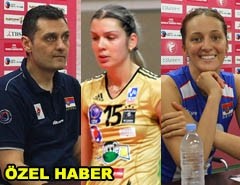 The new spiker of Omichka OMSK is the Serbian national player Anja Spasojevic. She was in Fenerbahce Acıbadem in the season 2008-2009 and is currently playing for the French RC Cannes.

Apart from Anja, Maja Ognjenovic will also play for the Russian team in the new season. She was the member of Eczacıbaşı ZENTIVA in the season 2009-2010 and is now the setter of Liu Jo Volley Modena.