The upset suffered against Latina was partially forgotten following the 3-1 victory over Modena for Belluno. MVP: Fei. The semi-finalist will be known tomorrow when Modena takes on Latina. Modena will need a 3-0 score to go through. 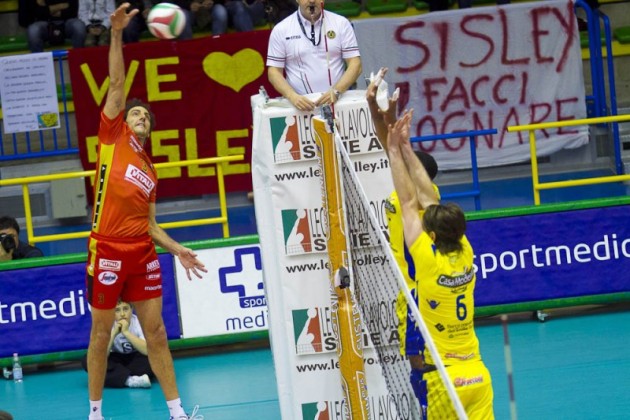 Roberto Piazza (coach Sisley Belluno): “We did a good job of bouncing back after yesterday’s defeat: We wasted an opportunity but redeemed ourselves today. Credit to Latina for the splendid game they played yesterday. But today, Belluno played at a different level. There is a lot of pressure in those games and our opponent’s mistakes are part of the game. We’ll see what happens tomorrow between Modena and Latina. We’re hoping to get second place now”.

Mikko Esko (Casa Modena): “We gave everything we had tonight but that was not enough. We missed some important players it’s true, but that should not be an excuse for the defeat. We’d better forget about this game because we have another crucial one tomorrow. We’re frustrated but we have to think we still have our chances by beating Latina 3-0. We’ll have a go”.

Daniele Sottile (Andreoli Latina): “I have to admit that Belluno was much better today, with more determination. We were lucky they had a bad day against us. Modena seemed to struggled at the start, they might have to get used to this playoff atmosphere, it’s particular, there is a lot of pressure, you play your season in two games. I think that can be the reason of the many initial mistakes on the serve. We’ll see what they’ll do against us. We are super motivated following our big win against Belluno. This was a good game in which we played better in the clutch time. Now we have a big opportunity against Modena, we’ll need to play a great game. Just like Belluno, Modena is one of the great teams of Italian Volleyball. If we realized a breakthrough on Saturday, there’s no reason we couldn’t do it again on Monday. We are in the race, let’s have a good run”.

Novara’s setter will show you how to...