Volleyball is sport number one in Qatar at this moment! Thanks to Al Rayyan! 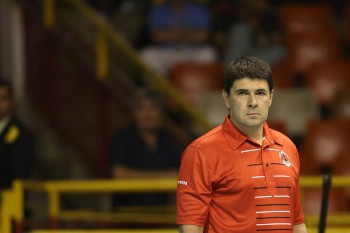 Igor Arbutina and his players have achieved something huge – they have advanced to the final game of Club’s World Championship!

Couple of hours before the match for the trophy we called Arbutina to hear the first impressions of this tremendous result.

“The feeling is great. Our goal was to reach the semifinals, to be better than two years ago…When we managed to do that, we were relaxed against Sada Cruzeiro, fully aware that Brazilians are among Belogorie the main favorites on the tournament. But, we have defeated them.”

Clubs from Qatar have never advanced into the Final Four of the Club’s World Championships. Fact that gives even more pleasure…

“All people from the club are just thrilled. I have heard that officials received countless phone calls with congratulations. It is a historic success, not just for Qatar, but for the whole region. We will fully realize what we have done when we get back”

Although Al Rayyan has brought many famous players for this tournament, it is never easy to form a team in such short period. But, Arbutina did it..

“They are all amazing players and amazing people. Many of them have already been in Al Rayyan before, also some were playing together in Europe. We started slow, with many mistakes in blocking and defense. But we have been raising our level from game to game, and finally were the best in the semifinal.”

The final game is approaching and the opponent will be European champion – Belogorie.

“They are the best club at the moment. Very powerful in every segment of the game, especially in blocking and serving. But, if they give us a chance to beat them… We will do everything to seize it” – concluded Arbutina.

Bravo coach! Go and get them!