CEV: Netherlands stays alive after a dramatic turnaround against Serbia

Ankara, Turkey, May 2, 2012. The Netherlands is keeping its Olympic dream alive after managing its first victory at the 2012 Olympic Games - European Qualification in Ankara. The Oranjes succeeded in hammering out a complete turnaround against reigning European champions Serbia for a dramatic 3:2 (20-25, 28-30, 28-26, 30-28, 15-11) upset. 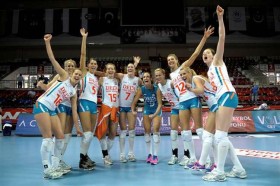 The two teams started the game carefully screening for each other’s weaknesses. Gradually between the two technical time-outs Serbia started gaining advantage. With some great hits mostly from Natasha Krsmanovic, Milena Rasic and Jovana Brakocevic the attacks of the Blues proved more efficient than those of Gido Vermeulen’s team despite the 3 aces that the Oranjes achieved during the first set. After 13-20 in Serbia’s favor, the Dutch attempted a comeback, but it was too late for anything better than a final score of 20-25.

As the level of play sharply increased in the second set, so did the number of unforced errors both teams made. The team of the Netherlands was able to pile up a 10-6 lead with some powerful hits from captain Manon Flier. After 19-16, four consecutive points for Serbia not only re-established the equilibrium, but also reversed the lead. The dramatic battle in every rally continued until an ace by Jovana Vesovic tipped the score to 30-28 Serbia’s way.

The story of the third set was like a mirror image of the second. This time Zoran Terzic’s players could not hold on to a 5-point lead they had at 17-12. Dutch setter Laura Dijkema changed tactics by passing more balls to Lonneke Sloetjes and Caroline Catharina Wensink and they did no let her down.  Sloetjes scored 8 and Wensink contributed 5 more to a final score of 28-26 in favor of the Netherlands.

The Blues put their act back together for the start of the fourth set and quickly went way up in the score. By the second technical time-out they already had a 9-point lead and seemed to be cruising towards a three-point victory, but having switched setters, the Oranjes started fighting back point after point. Another 8 points from Sloetjes helped the Netherlands catch up and eventually flip the score to 30-28 to stay in the match.

The Dutch managed an 8-point streak at the beginning of the tie-break, but even this did not make the final outcome of the match any clearer. This time the Serbs fought back to squeeze the opponent’s lead down to only 3 points, but finally a powerful hit by Wensink for 15-11 put an end to this spectacular match.

Lonneke Sloetjes became the game’s top scorer with 23 points. 19 points for the winners came each from Caroline Wensink and Manon Flier (7 blocks).  Milena Rasic and Natasha Krsmanovic were most prolific for Serbia with 20 points each.

“It was a hard match as it was the first of the tournament for us” Serbian captain Maja Ognjenovic stated after the game.  “We started well, but could not carry on with the tempo of the match and as a result we lost due to lack of concentration”.

“Yesterday we fought for every ball but it did not pay off,” a happy Manon Flier said. “Today we knew Serbia was strong, but we never gave up. We came back due to our team spirit.  We have shown that we can play with the best teams. Now, our confidence has increased.  We will celebrate this victory and will look forward to the following matches”.

According to the head coach of Serbia Zoran Terzic, the Netherlands deserved to win. “We played well in some parts of the game, but badly in the rest”, he explained. “I do not know why, but we played without courage in the match, especially in serving and attacks. Of course, I am not happy with the result. The next two matches, especially the last match against Poland, are very important for us. We want to succeed in those matches and continue in the tournament”.

His Dutch counterpart Gido Vermeulen said it was a fighting match. “We never gave up although we started badly. Our energy increased in the end, especially with the spirit of the bench players. We were also luckier in the fourth set”.