This was perhaps the best game in the Grand Prix 2014 so far! 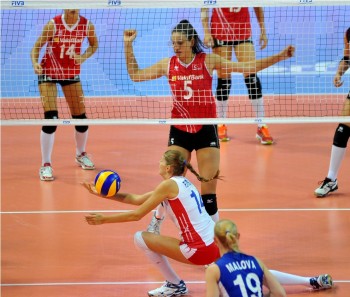 Arena in the Turkish capital was just too small to welcome all fans who wanted to watch this game. Stands were fully packed, with a lot of Turkish flags flying high, and that atmosphere helped home team to take a lead of 2-0 in sets against the reigning world champion!

But, Russia is just too good to be defeated that easily. Squad of Yuri Marichev performed an amazing comeback and took this game into the tie-break!

And, then another epic set. Turkey gained a big lead (8-3), but Russia kept fighting and came close to only one point behind (10-9). But then home team won four points in a row! One of them after a big mistake of Kosianenko who stepped into the opposition court in crucial moments.

Eventually, Turkey used the second match ball, after a great spike by.

Neriman Ozsoy led Turkish side with 26 points, while Gozde Sonsirma added 16. In the away squad, Yulia Podskalnaya scored 15 points, while Alexandra Pasynkova made 13.

So, Turkey is the only team beside Brazil who has all three victories after the first Grand Prix 2014 weekend (3-0), while Russia suffered the first defeat in competition (2-1).

Tie-briek 10-9 and then It was mistake of arbitr, not Kosyanenko. A touch was by turkish player.

And the referee was from…?

WoV coaching board in Qatar