The Finals of the FIVB World Grand Prix will get under way on Wednesday with Brazil, Belgium, China, Japan, Russia and Turkey battling for the top prize. 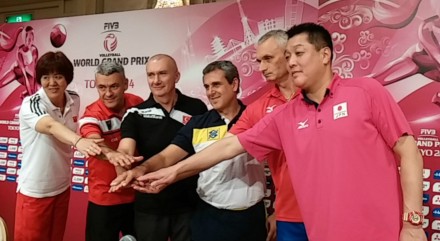 Brazil coach Jose Roberto Guimaraes, who led his team through a strong Preliminary Round performance in which they won all nine games and only dropped two sets, said the Finals were all about what happens from this point on.

“Nobody knows who is going to prevail in the Finals,” he said. “Any pressure we have is to make sure we have a good game and show what we can do. The matches we start tomorrow are important as we head toward the World Championship, so we will do our best.”

Turkey had the second-best win-loss record (6-3) in the Preliminary Round and coach Massimo Barbolini also emphasized the importance of this week’s competition.

“For our team, in the beginning our goal was to develop our level for the World Championships and I’m sure playing five very, very tough matches will be very important for us,” he stated. “It’s a pleasure and honour for us to be playing in the Final Six.”

China finished second in the Preliminary Round with five wins and four losses with a team that coach Jenny Lang Ping says is still learning.

“We’re happy to be in these Finals and happy to see so many high-level teams here,” she commented. “For us, we are trying to use some younger players to give them more experience and raise their level technically. We want to thank the people in Japan for having us here.”

“Tomorrow, the Finals will start and as head coach of Japan I know the best teams in the world are here and we will do our best to show what we can do,” Japan coach Masayoshi Manabe said.

Russia finished fourth in the Preliminary Round, level on points with Turkey, and coach Yury Marichev pointed out that all the teams have some vulnerabilities.

“I’m very happy to be here in Japan and reach the Finals of the World Grand Prix, which was very difficult,” he said. “I hope we will be successful here. I think every team has some problems and weak points. Our team now has many young players and we are trying to develop these new talents.”

Belgium won Group 2 in the Preliminary Round to reach the Finals for the first time and coach Gert Vande Broek said the tournament would be valuable for his team.

“It’s the first participation for Belgium in the World Grand Prix and to reach the Finals is a surprise,” Belgium’s coach stated. “It’s a big honour to play in Japan where women’s volleyball is extremely popular, so it will be a great experience for my young team. We have a young group with a very experienced setter (Frauke Dirickx) who has played in top clubs in Europe. The player with the most attacking quality is Lise Van Hecke, but our main quality is the balance within the team. We have 12 good players who work hard as a team and this tournament is very important for the players to develop as a team.”

Everything a breath-taking rally needs (VIDEO)