Russia defeated Mexico 3-1, for their third straight victory in Pool C of the FIVB Volleyball Men’s World Championship at the Ergo Arena on Friday. 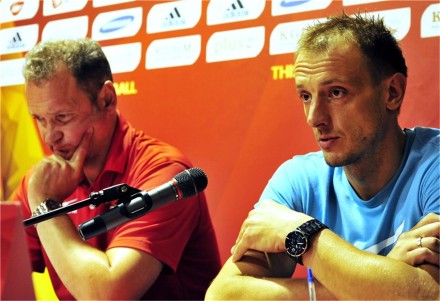 Mexico captain Carlos Guerra: “On our side, we were very much looking forward to this match against the London 2012 Olympic gold medallists. It’s a huge honour for us. We were very much into the game in the first set as we tried to show our best. Then Russia showed its real capacity of their skills. We simply could not keep up with them. My team was hoping for at least one win in this tournament and we still have two matches to achieve it.”

Mexico coach Sergio Hernandez: “As soon as we knew we will be facing the Russian team, we were extremely joyful, it was like a real celebration for us. This is a good experience for the team. After showing them our skills in the first set, we were not able to sustain and show our kind of game in the next three sets. It was impossible to control the ball. Our good moments in this match were not enough to get a victory. Even though the result did not favour us, there were still positives in this match. We are glad with how this match came out.”

Russia captain Sergey Makarov: “It was important for us to gain the three points and I am happy that we did it again. It was also important because we wanted to rest our experienced players and we were able to do so. Our coach wanted to test our substitutes and give them a chance to play. In the first set, they got a bit nervous but still we managed to get hold of the match in the next three sets. Our strength as a team will grow as the tournament progresses.”

Russia coach Andrey Voronkov: “I am quite glad that I am able to test my reserve players. We have also learned that we should play flawlessly since the first whistle and not since after losing a set. We cannot let this situation happen again. My team will learn on this and hopefully they will play better.”