Lausanne, Switzerland, December 18, 2011 – FIVB Volleyball World Grand Prix 2011 gold and silver medallists, USA and Brazil, will clash on the opening weekend of the 20th edition of the tournament after the 2012 pools were officially confirmed by the FIVB Sports Events Council in Lausanne, Switzerland on Saturday. 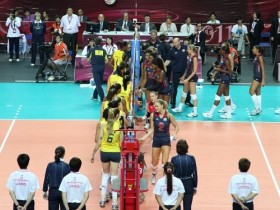 In the same format as 2011, a total of 16 teams will battle it out across three weeks of pool-play in 10 countries from June 8 to 24 ahead of the Finals which will see six teams compete for the premier annual women’s volleyball tournament top prize.
Ningbo will host the final phase for the third time after the Chinese city welcomed the world’s top women’s sides in 2007 and 2010.

USA’s battle with Brazil, which has seen the world No. 1 Americans win the past two editions of the World Grand Prix ahead of Brazil – who only recently lost their world No.1 ranking to USA – highlights the opening weekend from June 8 to 10 and they will be joined by either Kenya or Chinese Taipei (depending on the outcome of the World Grand Prix qualifying match) in the Dominican Republic in Group B.

Elsewhere it will be a battle of European supremacy in Group D as Italy, Serbia and Germany travel to Poland, with all four capable of finishing on top. Meanwhile Puerto Rico, Thailand and Argentina travel to China in Group A and Japan, Cuba and Turkey meet Korea in Group C.

Week two will again feature a stand-off between USA and Brazil in Group E, with the latter having home advantage from June 15 to 17.

They will be joined by the Dominican Republic and Italy.

Group G will take place in Chinese Taipei with either the hosts or Kenya meeting China, Poland and Korea while Group H will be held in Serbia with Argentina, Cuba and Turkey making the journey.

Japan will again act as hosts again on the final weekend of preliminary round from June 22 to 24, this time taking on Poland, Turkey and Asian rivals Korea.

Group J will be held in Thailand as they welcome USA, Serbia and either Kenya or Chinese Taipei while Group K sees China take on Brazil, Cuba and Puerto Rico.

Finally, Italy, Germany, Dominican Republic and Argentina will all meet in the neutral setting of Kazakhstan.

The top five ranked teams at the end of the three weeks of Preliminary Round action will join hosts China in Ningbo where they will be split into two pools of three teams.

The top two teams from each group will move on to the semifinals with the winners reaching the finals while the losers play for bronze.

Check out new matches on WOVVIDEO

How to stretch before volleyball (VIDEO)