Argentina: The second Grand Prix of the women league with the Aegentine juniors team will take place in Parana this weekend

Paraná, Argentina, January 26, 2012 - This weekend, the second Grand Prix corresponding to the ACLAV A1 Seniors' Women League will take place at Club Estudiantes in the city of Paraná with the host team facing Boca, San Martín de Formosa and the Argentine Seniors' Women Team - the last adding experience in a year with a demanding international calendar. 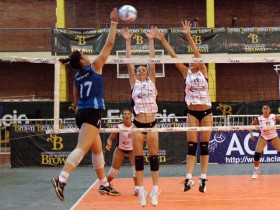 The team coached by Guillermo Cáceres, will face first Formosa, its last rival on the first Grand Prix in Almirante Brown (where they won their first set) on Friday at 19.00.

Then, on Saturday at the same time they will play v the title holder, Boca Juniors to close on Sunday but at 21.00 v the host team of Estudiantes.

The national team that concentrates in Los Toldos will host the third Grand Prix next weekend.

The team added to its players the opposite player Priscila Bosio and the libero Jazmín Molli, (both part of the Turkey 2011 World Championship).

Many of today’s Junior team are youth players with both gras-root categories playing their 2012 South American Championships – that qualifies for the 2012 World Championship.