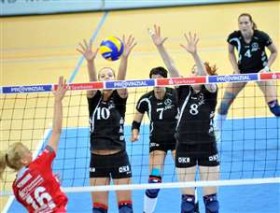 It was the match every Volleyball fan in Schwerin was waiting for and the reason for a well crowded hall with 1’455 spectators in attendance.

SCHWERINER SC started very well against the rivals from Dresden; opting for Lisa Thomsen as libero, Mira Topic, Julia Retzlaff, Patricia Thormann, Berit Kauffeldt, Denise Hanke and Anja Brandt the SSC put their mark on the first set and wrapped it up with an unexpectedly speedy 25-15.

But there was nothing to lose for the team of Alexander Waibl so his players quickly forgot the first 23 minutes of play while the hosts could not catch a good tempo in set 2.

The very early lead was protected to the end by Dresden (11-25).

The opening of the third set was pretty close and actually this was the first time that the match was that equal.

However, SCHWERINER SC gradually broke away and seemed to go for a comfortable 2:1 (20:13).

DRESDNER SC didn’t give up and scored 7 points in a row until the team of coach Teun Buijs got back into the match and finished the set at 25-22.

Set 4 was even more exciting than the previous one.

The spectators followed on their feet the great rallies they had been barely waiting for.

Both teams fought for each ball and it became a match of the highest level – this time with more mistakes for Schwerin and the better end for the guests.

It was hence the tie-break to force the final decision and the players of SCHWERINER SC should forget their performance there as quickly as possible.

The team was shown up by their guests, was never able to come back and had to admit defeat.

A reason for the disappointing performance of his players might have been “that their concentration dropped down after losing the fourth set” Teun Buijs tries to explain.

His colleague from Dresden, Alexander Waibl, says that actually both teams went through many ups and downs.

This is not that surprising especially as almost 20 matches were played in the past 2 months as both teams were busy with the domestic competitions as well as with the prelims of the elitist CEV Volleyball Champions League.

DRESDNER SC is continuing its adventure there already next week playing host to Russia’s Dinamo KAZAN for the first round of the 1/8 finals; as for SCHWERINER SC, the team will join the Challenge Round of the 2012 CEV Volleyball Cup in late February and then try to go for a fourth crown – after those from 2001, 2006 and 2007 – playing Rote Raben VILSBIBURG in the final of the national cup scheduled for March 4 in Halle/Westfalen.

Germany: Getting to know – Christian Dünnes

Argentina: The second Grand Prix of the women league with the Aegentine juniors team will take place in Parana this weekend

Germany: The ravens fly away – VCO...