Germany: Getting to know – Christian Dünnes

Munich, Germany, January 26, 2012. Like every new player that joins the club of Generali UNTERHACHING Christian Dünnes also had his turn to take a seat on the red couch at Generali Sports Arena to talk a little bit about himself. 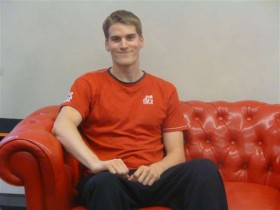 Dünnes is regularly top scoring for the side from Bavaria and he shall play a major role also when it comes to the Playoffs 12 game with Lokomotiv NOVOSIBIRSK scheduled for next week.

If it had gone Mihai Paduretu’s way Christian Dünnes would have taken a seat on that famous red couch already in 2009.

It was then when the Romanian-born mentor wanted to steer the diagonal spiker to Unterhaching for the first time.

Dünnes just came off his last season with Copra PIACENZA.

With the Italian club he had won the European Top Teams Cup in 2006 and the Italian national league in 2009.

“We were just a few days late as Christian had already signed for evivo DÜREN” Paduretu recalls.

Dünnes proved his worth as Generali’s opponent becoming the best scorer in both of his seasons with DÜREN while getting voted Player of the Year in 2010 by Germany’s Volleyball magazine.

It was at that time when Paduretu finally lured Dünnes to Bavaria – in the summer of 2010 he signed a two-year contract with the Bavarians effectively starting with the 2011/2012 season.

Dünnes had some big shoes to fill. His predecessor was Australian Paul Carroll who became the MVP of the Bundesliga in 2011 but moved to BERLIN Recycling Volleys last summer.

Carroll’s game is more spectacular but Dünnes gets credit for being more constant.

His coach calls him a “Volleyball fanatic”, and Dünnes readily admits: “If I could I would play Volleyball until I’m 65 years old”.

For he knows that this won’t be possible at least on the highest international level he has already gotten a bachelor’s degree in economics, as “you have to be prepared for the years to come” he says.

However, barring injuries and problems with his knees that have hampered him in the past and reduced his number of appearances in the national team to 38 so far, it might take a while until Dünnes gives up Volleyball – he is only 27 years old.

In Unterhaching he has been essential so far in Generali’s dominance of the Bundesliga – Paduretu’s side is still unbeaten in national competitions so far, sitting firmly atop the league and reaching the cup final for a fourth consecutive time.

Right now Dünnes is the second best scorer in the Bundesliga and second as well in the MVP standings.

Dünnes spent four years, from 2005 to 2009, in Italy. Advised by Stelian Moculescu, who was Germany’s national team coach at that time, he signed a contract with PIACENZA.

“For the first two years I didn’t play that much, then I was sent on loan to Loreto in the second division. There things went very well. The level of the competition in Italy’s second division is astonishingly high” Dünnes remembers.

After coming back to PIACENZA Dünnes finished his time in Italy by winning the championship with his club.

Paduretu regards Dünnes’ time in Italy as very important. “You just can tell when a player has been there. There you really become a Volleyball professional. Christian knows everything that is important, from proper nutrition to recovery times” the coach says.

Dünnes doesn’t want to miss the time either. “I learned the language, I won a championship, I improved my game – and I have fond memories” he says.

For UNTERHACHING Dünnes is not only important as a prolific scorer.

“Together with our captain Max Günthör he is vital to our team. We not only got us a dangerous attacker, we got a leader as well” Paduretu says.

Apart from trying to work a miracle in the Playoffs 12 against NOVOSIBIRSK Dünnes has set his sights on winning the German championship with Generali.

“That would be more important to the club than winning the cup a fourth time in a row” he states.

On the other hand: Dünnes is missing a cup title. In 2010 he was up two sets to none in the final while playing with DÜREN – only to ultimately lose that match to UNTERHACHING.

OG M: Germany comes from behind to...