The coach showed his greater anger in national newspaper "Ole" followed by many of his players after the match Argentina lost against Bulgaria with disastrous mistakes of the referees in the fourth set. 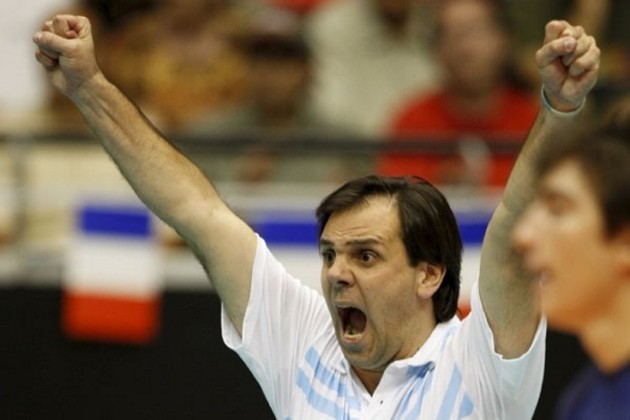 Argentina played its second match in the Arena Armeec of Sofia after a 3-0 defeat on previous game. South American team was leading 1-0, but then Bulgaria turned it round in third set.

The fourth one was had a dramatic definition. Neither of the teams could get a difference and public was silent and worried about the game development. Opposite hitter Bruno Romanutti, had the first set ball at 24-23 to reach the tie-break but first referee Helio Ormondo didn’t see his spike touched the Bulgarian’s block before the ball has gone out of the court. None in Argentina could believe the decision and while they argued with the FIVB’s supervisor, a screen displayed the replay.

Weber requested a timeout to maintain calm and the team jumped into the court to continue its battle. Once again, Argentina had another set-ball in 29-28 when Tsvetan Sokolov touched the antenna with his attack. Incredibly, second referee Akihiko Tano, decided that Federico Pereyra touched the net and gave the point to local squad.

No way back. The bench of Argentina exploited while the public celebrated the point. South-Americans lost their minds before final 31-29 for Bulgaria. Players claimed to the referees but it was useless. “They haven’t robbed us like today since a long time. Everyone saw what happened, I have nothing to say” confessed Weber after the end of the match. Libero Alexis Gonzalez agreed: “Maintain the score in this level it’s not easy. We were doing things right and they just stole us. We’re very angry. If we had won the fourth set, we would take the match”.

Later, on their Twitter’s accounts other players talked about their impressions. Rodrigo Quiroga was the first: “They stole us like they haven’t made in many time”. Sebastian Sole added: “Thanks for the support! They robbed us! But we played better”. Captain Luciano De Cecco took his time and wrote with some humour: “Good morning to everyone. After yesterday match and concluding, a taxi driver told me ‘how they stole you yesterday”.

Putting aside the referees’ decision and their disappointment, the team values the performance in the match, after a critical defeat on Saturday. They reached Bulgaria’s level and lead the game in some moments. The coach expressed his feelings about the game: “We made a great play, with good and bad moments. I’m happy with the team’s game; even we need to improve some individual stuff. We fulfil the objective of keeping the parity of the sets and not letting them win with big difference. We deserved the tie-break”.